Responding to a Tribune investigation that found some popular cellphone models measured above federal limits for radiofrequency radiation, the Federal Communications Commission said this week that its own testing found all eight models it evaluated were in compliance. 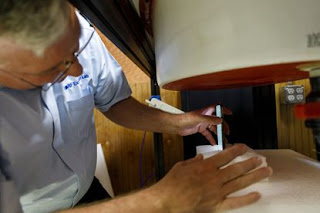 The testing commissioned by the Tribune, conducted according to federal guidelines at an accredited laboratory in California, examined 11 cellphone models from four manufacturers. The phones were purchased new. Among other findings, the Tribune reported that all four Apple iPhone 7s tested yielded results exceeding the federal limit.

At the time, Apple disputed the results and said the lab used by the newspaper did not test the phones the same way it does.

For the FCC’s tests, Apple provided the agency with two iPhone models that the Tribune tested, according to the FCC’s report. The agency also said it collected from manufacturers “any necessary test software, RF cables, and other accessories required for testing the devices." Such software was unavailable to the Tribune’s lab when testing Apple phones.

The agency’s test of an iPhone 7 yielded a result roughly 40% below the federal limit for radiofrequency radiation.

The Tribune also had reported that an iPhone X, an iPhone 8 and a Moto e5 Play from Motorola measured above the limit under certain testing conditions.

In the FCC testing, results for the e5 Play and the iPhone X were under the limit, as were those for the iPhone XS, Galaxy S9, Galaxy J3, Moto g6 Play and Vivo 5 Mini. In all, the FCC tested 11 cellphones representing eight models. The FCC did not test an iPhone 8.

The FCC’s report concluded there was no evidence of “violations of any FCC rules” for the safety limit. “The FCC’s tests confirm that all tested sample devices comply with the FCC’s strict RF exposure guidelines,” Julie Knapp, chief of the FCC Office of Engineering and Technology, said in a quote provided by the agency.

Two longtime critics of the FCC’s regulation of cellphones said they were not won over by the agency’s results. They criticized the FCC for relying on manufacturers to supply most of the phones tested and the testing software.

Joel Moskowitz, a cellphone expert at the University of California at Berkeley, said the FCC should have a process in place to test phones off the shelf without needing manufacturers to provide anything for the testing.

If only labs working with manufacturers can test devices, he said, “then there is a serious problem with the FCC testing protocol.”

A spokesman for the FCC said using the companies’ software was necessary to achieve accurate results. Manufacturers, he said, can request confidentiality for their devices’ technical details to protect trade secrets. The tests were conducted independently by FCC Lab engineers, he added.

Knapp’s quote states: “FCC engineers had significant questions as to whether the tests (for the Tribune) were performed properly and consistent with FCC guidance and we expressed these concerns directly to the Chicago Tribune. Because we take seriously any claims of non-compliance with RF exposure standards, the FCC tested the same device models at our labs.”

Apple declined comment this week beyond what it has previously told the Tribune. Motorola did not respond to emails but has said its phones comply with federal standards. The company previously speculated that the Tribune’s initial testing did not trigger the e5 Play’s proximity sensors. Such sensors are designed to reduce a phone’s power when it is touching or extremely close to a person, decreasing radiofrequency radiation. Samsung did not respond to an email from the Tribune.

Lab owner Jay Moulton said all the Tribune’s tests were done in accordance with detailed FCC rules and guidelines. He filed a 100-page report that the Tribune shared with the government and manufacturers.

The sensors that reduce a phone’s power when it is near a human body should be tripped during testing without needing additional software from manufacturers, he said. “I do testing for laptops that have sensors in there, and I don’t have any special software,” Moulton said.

Moulton said that after the Tribune’s story was published, he was paid to conduct similar testing by attorneys representing plaintiffs in a class-action suit against Apple and Samsung. The suit alleges that the phone makers “intentionally misrepresented" the safety of their devices. Moulton said he is not being paid to act as an expert witness for those lawyers.

In a Dec. 5 filing, the plaintiffs’ lawyers said Moulton’s lab tested an iPhone 7+, an iPhone 8 and an iPhone XR as well as the Samsung Galaxy S8, Galaxy S9 and Galaxy S10. According to the filing, Apple phones tested above the federal limit, with the highest reading coming from an iPhone 7+, at more than twice the limit.

Neither Apple nor Samsung has filed a response in court.

Debate about the safety of cellphones has raged for years. High levels of radiofrequency radiation can heat biological tissue and cause harm, but it is less understood whether people, especially children, are at risk for health effects from exposure to low levels over many years of cellphone use.

Authorities in the 1990s set the federal exposure limit based solely on the heating risks of cellphone radiation, building in a 50-fold safety factor. But some researchers — and lawyers — have questioned whether the limit is safe enough. Those questions have spawned a long-running lawsuit against phone makers, carriers and trade groups over cancer risks.

The Tribune’s testing had two phases. One tested phones at the same distance from the body as manufacturers chose for their own premarket testing: from 5 to 15 mm away, depending on the model. This phase included retests of several models after manufacturers gave feedback on the test results.

The second phase tested phones at 2 mm from the body, to represent the phone being carried in a pocket.

The FCC’s recent study did not test phones at the 2 mm distance. In the Tribune testing, only one of the cellphone models met the federal safety standard at that distance.