Switzerland: Geneva: New Association "RUNE" Requests Moratorium on Department of Education's Plan for Use of Digital Technology in Primary School 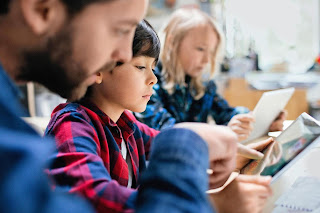 A new association has recently been established in Geneva: "RUNE" (Reflect on the use of digital technology and screens) whose purpose is to bring together parents of primary school students wanting meticulous analyses to be carried out before deciding to digitize the elementary school. "The digitization of daily life, which has become a public health issue, should not be taken lightly."
https://runegeneve.wordpress.com/
On 29 October 2020, the group launched a petition to the Geneva government (Grand Conseil) requesting a moratorium on the Department of Education's plan for digital education in primary school:
The group is not technophobic, but believe that a critical distance and a careful analysis of the social, environmental, financial and health costs of the use of digital technology by primary school students is necessary. Digital tools have multiple positive aspects, which should not be denied, but their potentially harmful or simply ineffective aspects must also be taken into account.
Here is what the group says about the use of screens and children's health.

The Use of Screens and Children's Health (translation)
[Links to documents in English only are provided.]

Several studies and professionals in the fields of health and children have noted that frequent and prolonged exposure to screens of all kinds can affect the physical, psychological and social development of children. Faced with the risks raised by the multiplication of screens in our children's lives, shouldn't school play a protective role?

Effects on vision, risks of screen addiction or psycho-social risks: many concerns have been raised in recent years by health and child health professionals, who believe that overexposure to screens is a major public health issue.

he health problems associated with the repeated use of screens, as identified in the book by Philippe Bihouix and Karine Mauvilly, Le désastre de l'école numérique, are multiple: eye fatigue, reduced vision (myopia), decreased concentration, low morale, impact on sleep due to circadian rhythm disorders, etc.

The repeated use of screens over long periods of time can thus cause irreversible effects on the retina, in the form of a photochemical reaction that kills the cells of the external retina, particularly in children. As Anne-Lefèvre-Balleyder reminds us in her article Why should we be wary of LED light, "before ten years, there are still no yellowed crystals or macular pigments to filter out some of the blue light and protect the eyes".

Other effects such as headaches and fatigue may also occur.

On the occasion of the publication of its new International Classification of Diseases (ICD-11) in 2018, the WHO officially recognized the existence of gaming addiction (gaming disorder).  In 2018, a review of available studies published in the Scandinavian Journal of Psychology estimated that about 5% of adolescents are affected by this scourge.

Also in the publication of ICD-11, the WHO also mentions "disorders related to the use of the Internet and similar devices". Specialists have been using this term ever since they discovered that dependence on Internet use, especially social networking, alters the anatomy of certain brain regions in a way similar to that of other behavioural addictions. This was demonstrated by Christian Montag and his colleagues in the scientific report Internet Communication Disorder and the structure of the human brain: initial insights on WeChat addiction, published in 2018.

In 2014, Cecilia Cheng and Ay Li revealed in a meta-analysis of studies conducted in 31 countries that 6% of the world's population showed signs of Internet addiction.

In the documentary "The Social Dilemma", a number of reformers who have held positions of power at Google, Facebook or Pinterest explain the addictive process that starts as soon as you turn on your digital device, thanks to algorithms that compile data that accurately predict the behavior of individuals.

In France, the Collectif overexposure écrans (CoSE - Collectif sur exposition écrans), made up of pediatricians, child psychiatrists, psychologists, speech therapists and other health professionals, published in an op-ed in Le Monde on January 17, 2019, worrying figures of an increase in the number of school children aged 2 to 11 suffering from intellectual and cognitive disorders (24%), mental disorders (54%) and speech and language disorders (94%).

Furthermore, the use of screens probably has a negative impact on young people's self-confidence, as demonstrated by the study How Healthy Behaviour Supports Children's Wellbeing by Public Health England, the department in charge of public health in the United Kingdom, which questioned 42,000 children between the ages of 8 and 15 on their level of well-being, comparing their responses with their screen time.

The study also found that children who were more physically active were more able to concentrate at school, had better relationships with their peers and reported lower levels of worry, anxiety and depression. "Physical activity or real social interaction, i.e., face-to-face interaction with friends and family, are two factors known to reduce childhood anxiety," says Kevin Fenton, Director of Health and Welfare at Public Health England.

The composition of digital devices can also have an impact on health. For example, phthalate softener, a toxic chemical additive, is found in the soft plastic components of tablets. Soft plastic is sensitive to acidity, heat and fat," says Anne Lafourcade, an engineer and chemist specializing in environmental health. "If a tablet is heated in the sun, the phthalates and dyes migrate slowly to the young user. "Phthalates are on the list of proven endocrine disruptors.

The question arises as to the harmfulness of wave exposure for children. Uncertainties on this subject remain. The accumulation of electromagnetic sources is not insignificant: those of the tablet, the wifi terminal, the interactive whiteboard, the relay antenna of the neighborhood, etc..

On this subject, on May 31, 2011, the International Agency for Research on Cancer (IARC) of the WHO classified radiofrequency electromagnetic fields as possibly carcinogenic to humans (group 2B), on the basis of an increased risk of glioma, a type of malignant brain cancer. Its press release reveals that "in recent years, there has been growing concern about possible adverse health effects from exposure to radio frequency electromagnetic fields, such as those emitted by wireless communication devices. »

In the context of the multiplication of screens in the lives of our children, and in view of the health concerns raised by many health and child professionals, can elementary school be the relay of such a development, and even increase the health risks already incurred by the use of screens outside the classroom? Doesn't the digital school reinforce the risks by increasing overall screen time, legitimizing the screen as a good tool, and even encouraging children to connect at home after school?