Switzerland: Thousands of antennas: It looks like 5G but is it 5G?

Thousands of antennas - It looks like 5G but is it 5G?
The entire population has access to 5G, yet thousands of additional antennas are pending. Here's why.
by Julien Wicky, Tribune de Genève, 21 January 2023 - translation 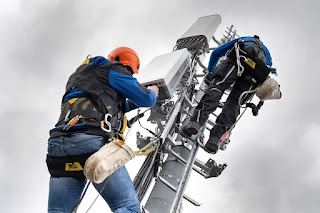 (Photo): Switzerland is already almost entirely covered by the 5G network, but for it to be equipped with all its features, 7,500 antennas are still needed. KEYSTONE

It is a figure that is paradoxical. On the website of the Federal Office of Communications (OFCOM), we can read that since the end of 2021, 100% of the Swiss population has been covered by the fifth generation mobile network, the famous 5G. On their sites, the three operators in the country do not say the opposite and claim the importance of their coverage. Yet in 2022, an additional 1,500 antennas were installed, bringing the total to 8,474 5G installations as of January 3 this year, according to data we requested from OFCOM. And it's not over. But if everyone is already covered, why continue to install new infrastructures, especially since these are very often opposed by groups of opponents?
Evolution of 5G in Switzerland
Number of 5G antennas installed in Switzerland between 2019 and 2923
On average, 120 5G antennas are installed each week. The majority is on existing locations.
OFCOM 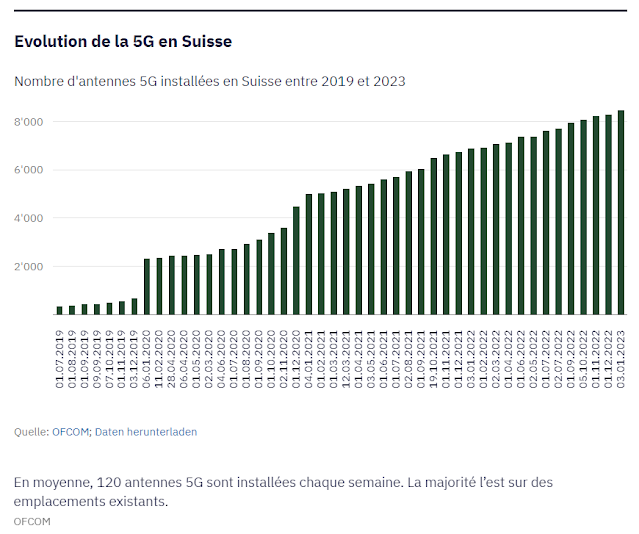 This is where it gets complicated. Because 5G, which is widely present today, does not use its full capacity. It's all about frequency. “5G can be transmitted via an adaptation of the antennas of previous technologies like 4G. It then uses lower frequencies and spreads more widely,” explains Xavier Studer, telecommunications expert and author of an independent blog on the subject. “It is in fact a form of update that we are carrying out on the existing antennas”, agrees Christian Neuhaus, spokesperson for Swisscom. This system made it possible to move quickly in the deployment of this technology and therefore to quickly achieve the aforementioned coverage objectives and, also, to relieve the previous networks. This also requires less complex authorization procedures.

While it cannot be said that it is a "fake 5G", it cannot provide all the intended functions. To reveal its full potential, 5G must be used at much higher frequencies (around 3.5 Gigahertz). Interest? This is where it deploys its so-called “adaptive” aspect by targeting connected devices rather than widely broadcasting the waves around. It's also a speed gain, ten times more than 4G, and a massive increase in the number of devices that can connect to the same antenna.

But for those who use their telephone, the change is imperceptible. “The difference is where a lot of users are connecting at the same time, like a square in a city or a train where everyone is watching streaming. Moreover, the development of this fast 5G is mainly done in urban centers and along the axes of communication”, explains Xavier Studer. The longer-term objective is to provide greater network availability for a quantity of connected devices.

** This map, from Swisscom, shows the extent of the network. 5G+.

It is also no surprise that operators are launching primarily in these densely populated areas. And in the face of growing questions, Swisscom and Salt are thus adopting the name “5G+”. But for OFCOM, this is more of a marketing argument since this designation does not allow conclusions to be drawn on the concrete state of the technical extension or to deduce additional requirements in terms of infrastructure.
7500 antennas needed

Furthermore, the standards for non-ionizing radiation remain those set out in the ordinances of the Federal Council. As a reminder, Switzerland still applies stricter rules than its neighbors. Opponents see it as a new demonstration of the anarchic deployment of 5G and question the real need for such powerful technology.

OFCOM does not set quantified targets. It is up to the operators to ensure adequate coverage for their customers. For the Swiss telecommunications association, all current installations must be modernized and the additional need is estimated at 7,500 stations to guarantee the quality and modernization of mobile networks. The frequencies of adaptive 5G being higher but spreading less far, more antennas are needed and it is also a question of absorbing the exponential increase in traffic. Swisscom spokesperson Christian Neuhaus confirms: “The data exchanged doubles every 15 to 18 months.”
** This map lists all antenna locations in Switzerland. Note that some slots may contain multiple technologies. OFCOM

But is it worth it to extend this ultra-fast network to the open countryside or to the top of the mountains? Sunrise spokesperson Rolf Ziebold cannot rule this out: “More and more medical devices are connected and one can imagine that rescue helicopters are equipped with them and that they will therefore need an adequate network.” The fight still looks tough. To date, 3,200 procedures are in progress, some for several years.

Julien Wicky has been a journalist for the Switzerland section since 2018. He specializes in investigations, particularly in Valais. He is also interested in the themes of territory, mountains, energy and climate. Previously, he worked in the editorial staff of the “Nouvelliste”. More informations@JulienWicky
** We were unable to publish the two maps - please see original article.
Original article in French:
https://www.tdg.ch/ca-ressemble-a-de-la-5g-mais-est-ce-de-la-5g-747447926460
Publié par MerisRM à l'adresse 1:39 PM