Why Isn't the Canton of Geneva Protecting Its Population from the Risks of Wireless Radiation? 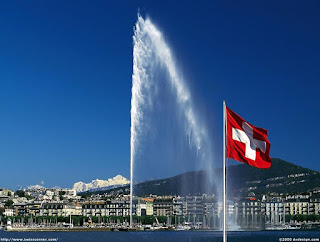 RE-POSTED:  29 October 2018:
In the canton of Geneva, no one wants to take responsibility to protect the population, especially vulnerable persons, from exposure to electromagnetic radiation.

Why Isn't the Canton of Geneva Protecting Its Population from the Risks of Wireless Radiation?
by Meris Michaels, 10 March 2017, updated
29 October 2018

Recently, we wrote to the government official responsible for health in the canton of Geneva, Mauro Poggia, enclosing a copy of ARA's  letter to the State Administrator in Geneva, Esther Alder, which is posted on this blog.

In his letter, Mr. Poggia writes, [translation from French] :

"I am aware that certain persons are affected by non ionizing radiation. However, like you, I note that use of various modern communication media are developing significantly. This tendency cannot be reversed...

"You therefore understand that it is impossible to apply constraining limitations for users in our canton. Moreover, my department does not have the competence to issue specific recommendations in this domain. It is in fact the Federal Office for Public Health... which is solely competent to issue norms and directives concerning use of emitters of non ionizing radiation. I however note that scientific studies published to date in editorial policy journals declare the absence of danger to public health in general.


Concerning information, the work of your association addresses this and I encourage you to use your network to diffuse information that you deem necessary, while ensuring its objectivity. Moreover, one of the focuses of the Concept of health promotion and prevention that you mention, developed by my department, includes the environment. The concerned services of the State, both my department as well as that of my colleague, the State Councillor Mr. Luc Barthassat, will pay attention to the progress of scientific knowledge in this domain.

As usual, no one wants to take responsibility to protect the population, especially vulnerable persons, from exposure to electromagnetic radiation.  We are only asking that recommendations for reducing exposure cited by the Federal Offices for the Environment and for Public Health be made visible to the public, by including these recommendations, for example,  in any information distributed to the population in the context of Geneva canton's strategy for health promotion and prevention.  We are not requesting a change in the limit values of mobile antennas.

Officials keep citing the World Health Organization and ICNIRP norms and documents as justification for the harmlessness of EM radiation.  The European States, including Switzerland, meekly follow the advice they receive from ICNIRP, blindly trusting a group of self-appointed experts without evaluating conflicts of interest of its members, a number of whom have relationships with telecommunications or electric companies. The public exposure standards for non-ionizing radiation set by this commission are therefore impartial and, moreover, outdated because ICNIRP refuses to accept new scientific evidence of potential health risks from non-thermal low-intensity radiation.  ICNIRP standards are based only on the thermal effects of non-ionizing radiation.

The International EMF Project of the World Health Organization, which is tasked with assessing the safety and biological effects of non-ionizing radiation, has been co-opted by the very industry responsible for the unchecked proliferation of this same radiation worldwide. The project is led by an electrical engineer with no health credentials, who has carried out research for the wireless telecommunications industry and therefore has a clear conflict of interest. Despite the requirement that its experts declare any conflict of interest, and despite the fact that it is against WHO rules for any individual or committee to take money from industry, WHO is known to have been indirectly receiving substantial funding from the wireless telecoms industry for many years.

We feel that Mr. Poggia is passing the buck.  A canton can issue its own ordinances regarding limiting exposure to EM radiation, as is the case for Neuchâtel which, in 2010, issued an ordinance where only wired access to internet is authorized in classrooms in nursery and primary schools.  As we pointed out in our letter to Mrs. Alder, it is possible to establish wireless-free places, such as the premises of the Geneva Cancer League which has no Wi-Fi.

The wireless industry is extremely lucrative, and it would be "bad for the economy" if any attempt were made to curb use of its products.

Another, more sinister, aspect of proliferation of wireless technology is allowing access to data.  We believe that one reason the canton is encouraging this is in order to allow the forces of order to have access to personal information of individuals and the many international organizations on its territory.

In short, we cannot understand how authorities responsible for the health of millions of persons, from city and state health departments to the World Health Organization, choose to minimize or even deny the issue of the health effects of EM radiation.

For information, here is what the official site of the City of Geneva says about Wi-Fi and health: (updated 11 July 2017) [translation from French]:

"The health effects of low-intensity radiofrequencies emitted by Wi-Fi are the subject of widespread societal debate, despite the fact that university hospitals now offer Wi-Fi to their patients.

"Scientific studies show that the effects of radiation are much less than cell phone base stations. At this time, there is no evidence that wireless networks pose a threat to health, including children."
Publié par Meris à l'adresse 10:42 AM