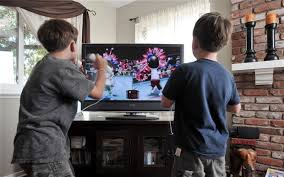 Many video game systems use Wi-Fi which emits electromagnetic radiation (EMR).  There is no evidence that the frequencies emitted by Wi-Fi are safe, and plenty of data on sensitive kids getting headaches, cardiac arrhythmias, and more while at school. These symptoms wane when they are out of the school buildings for weekends and vacations.  Outside of school, children are being exposed to radio frequency when using game systems like Xbox and Wii.  Environmental engineers doing testing in the field say that these wireless video game systems emit dangerous EMR, and those emissions continue even when the units are turned off.

Dr. Sinatra wondered if there was any warning in the fine print of game manuals.  Following this article are the warnings contained in the manual of the Nintendo Wii games.  Nothing about the dangers of EMR, but there is mention of other health effects including seizures, repetitive motion injuries, eye strain, motion sickness, and radiofrequency (RF) interference with pacemakers. The manual seems more concerned about the effects of RF waves on the operation of nearby electronics than on the human body!

Are Video Game Systems Harmful?
by Dr. Stephen Sinatra, 22 May 2012

As many of you know, I’m highly concerned about the harmful electro-magnetic radiation (EMR) in our environment—and what things like cell phones and their towers, microwave ovens, cordless phones, and more are doing to our health. But what many of us don't realize is that we, and our children who are extremely vulnerable to EMR exposure, are also getting a dose in our video game systems.

Many video game systems use Wi-Fi which emits EMR, and I’m a big proponent of banning Wi-Fi in our schools. There is no evidence that the frequencies emitted by Wi-Fi are safe, and plenty of data on sensitive kids getting headaches, cardiac arrhythmias, and more while at school. These symptoms wane when they are out of the school buildings for weekends and vacations.

But while I was at a Wireless Safety Summit this fall, I learned about another disturbing fact. Our kids are being exposed to radio frequency when using game systems like Xbox and Wii (I don’t know about PlayStation). I heard from environmental engineers doing testing in the field that these wireless video game systems emit dangerous EMR, and those emissions continue even when the units are turned off.

We don’t have those game systems at our home, so I don’t know if there is any warning in the fine print of the packaged game systems. The only way to keep them from emitting a signal, I’m told, is to unplug them.

But if you do choose to use Wi-Fi game systems, here’s how to minimize your family’s exposure. Unplug them when they are not in use, and do the same with your computer’s wireless router when no one is using it. Also, please pass this info to other parents and grandparents who are most likely just as in the dark about these game systems as I was.

Now it’s your turn: How do you protect your children from “too much technology?”

Some people (about 1 in 4000) may have seizures or blackouts triggered by light flashes or patterns, and this may occur while they are watching TV or playing video games, even if they have never had a seizure before.  Anyone who has had a seizure, loss of awareness, or other symptom linked to an epileptic condition should consult a doctor before playing a video game.
Parents should watch their children play video games. Stop playing and consult a doctor if you or your child has any of the following symptoms:
. Convulsions
. Eye or muscle twitching
. Loss of awareness
. Altered vision
. Involuntary movements
. Disorientation

To reduce the likelihood of a seizure when playing video games:
. Sit or stand as far from the screen as possible.
. Play video games on the smallest available television screen.
. Do not play if you are tired or need sleep.
. Play in a well-lit room.
. Take a 10 to 15 minute break every hour

Playing video games can make your muscles, joints, skin or eyes hurt. Follow these instructions to avoid problems such as tendinitis, carpal tunnel syndrome, skin irritation or eyestrain:
. Avoid excessive play. Parents should monitor their children for appropriate play.
. Take a 10 to 15 minute break every hour, even if you don't think you need it.
. If your hands, wrists, arms or eyes become tired or sore while playing, or if you feel symptoms such as tingling, numbness, burning or stiffness, stop and rest for several hours before playing again.
. If you continue to have any of the above symptoms or other discomfort during or after play, stop playing and see a doctor.

Playing video games can cause motion sickness in some players. If you or your child feel dizzy or nauseous when playing video games, stop playing and rest. Do not drive or engage in other demanding activity until you feel better.