Sometimes big news stories can only be seen by the shadows they cast. You would think that it should be easy to find detailed updates on theFukushima disaster‘s impact on our fishing industry, milk production, global radiation distribution patterns, etc. You would be mistaken. The massive media coverage following the initial disaster has fallen nearly silent. Some frustrated environmental advocates have suggested that there is a media blackout. Probably not, but media follow-up stories are few and far between these days.

In July of last year there were major stories about Fukushima and the plume of radiation reaching across the Pacific Ocean towards North America. On July 16, 2012, Deborah Dupre of the Examiner reported the following:

“As hair falls out of a Fukushima victim’s head, a new German study reports that North America’s West Coast will be the area most contaminated by Fukushima cesium of all regions in Pacific in 10 years, an “order-of-magnitude higher” than waters off Japan, according to a new German study followed by a former New York Times journalist going inside the no-entry zone and reporting radiation levels over 10 times higher than Tepco’s data.”

The article was accompanied by this scary graphic: 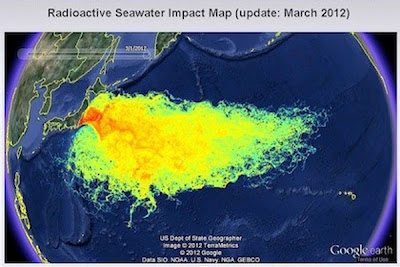 The article went on to say: “After 10 years, the concentrations become nearly homogeneous over the whole Pacific, with higher values in the east, extending along the North American coast with a maximum (~1 — 10 -’4) off Baja California,” a new research report states.”

Since then not much more has been reported on the spread of radiation, although there continues to be reports about the tons of debris from the tsunami still washing up on the Pacific coast.

(One recent article can be found here: click here)

My internet search skill may not be the best, but the fact that I have to search for follow-up stories is a warning sign. Journalists and the media should be paying more attention. The only recent article I could find related to radiation fallout from Fukushima was a scientific study published in November, 2012. It focuses primarily on how tracing the travel of radionuclides gives insight into atmospheric air circulation in the Northern Hemisphere. It is clear from the abstract that atmospheric traces of radiation from Fukushima have already encircled the hemisphere.

We deserve to know more about what the US, Canadian and Mexican governments are doing to monitor radiation levels, track distribution rates and study how it may be impacting our food and water.

Below is a reference to the recently published study.