The Impact of Technology on the Developing Child 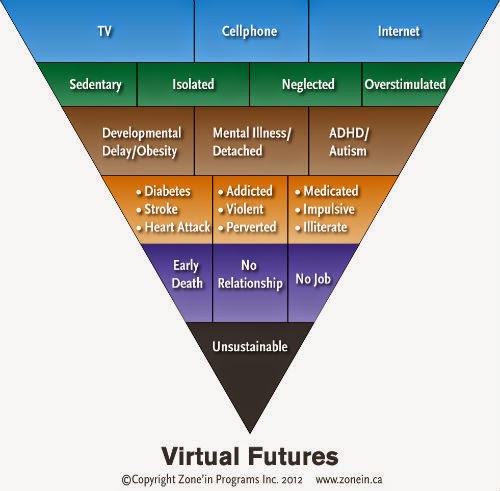 "Rather than hugging, playing, rough housing, and conversing with children, parents are increasingly resorting to providing their children with more TV, video games, and the latest iPads and cell phone devices, creating a deep and irreversible chasm between parent and child."

The Impact of Technology on the Developing Child
by Cris Rowan, Pediatric Occupational Therapist, The Huffington Post, 29 May 2013

Reminiscing about the good old days when we were growing up is a memory trip well worth taking when trying to understand the issues facing the children of today. A mere 20 years ago, children used to play outside all day, riding bikes, playing sports and building forts. Masters of imaginary games, children of the past created their own form of play that didn't require costly equipment or parental supervision. Children of the past moved... a lot, and their sensory world was nature based and simple. In the past, family time was often spent doing chores, and children had expectations to meet on a daily basis. The dining room table was a central place where families came together to eat and talk about their day, and after dinner became the center for baking, crafts and homework.

Today's families are different. Technology's impact on the 21st century family is fracturing its very foundation, and causing a disintegration of core values that long ago were the fabric that held families together. Juggling school, work, home, and community lives, parents now rely heavily on communication, information, and transportation technology to make their lives faster and more efficient. Entertainment technology (TV, Internet, video games, iPads, cell phones) has advanced so rapidly, that families have scarcely noticed the significant impact and changes to their family structure and lifestyles. A 2010 Kaiser Foundation study showed that elementary aged children use on average 7.5 hours per day of entertainment technology, 75 percent of these children have TV's in their bedrooms, and 50 percent of North American homes have the TV on all day. Gone is dining room table conversation, replaced by the "big screen" and take out.

Children now rely on technology for the majority of their play, grossly limiting challenges to their creativity and imaginations, as well as limiting necessary challenges to their bodies to achieve optimal sensory and motor development. Sedentary bodies bombarded with chaotic sensory stimulation are resulting in delays in attaining child developmental milestones, with subsequent negative impact on basic foundation skills for achieving literacy. Hard-wired for high speed, today's young are entering school struggling with self regulation and attention skills necessary for learning, eventually becoming significant behavior management problems for teachers in the classroom.

So what is the impact of technology on the developing child? Children's developing sensory, motor, and attachment systems have biologically not evolved to accommodate this sedentary, yet frenzied and chaotic nature of today's technology. The impact of rapidly advancing technology on the developing child has seen an increase of physical, psychological and behavior disorders that the health and education systems are just beginning to detect, much less understand. Child obesity and diabetes are now national epidemics in both Canada and the U.S., causally related to technology overuse. Diagnoses of ADHD, autism, coordination disorder, developmental delays, unintelligible speech, learning difficulties, sensory processing disorder, anxiety, depression, and sleep disorders are associated with technology overuse, and are increasing at an alarming rate. An urgent closer look at the critical factors for meeting developmental milestones, and the subsequent impact of technology on those factors, would assist parents, teachers and health professionals to better understand the complexities of this issue, and help create effective strategies to reduce technology use. 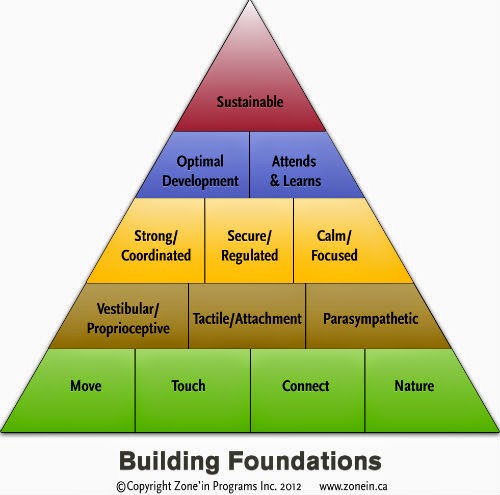 Further analysis of the impact of technology on the developing child indicates that while the vestibular, proprioceptive, tactile and attachment systems are under stimulated, the visual and auditory sensory systems are in "overload." This sensory imbalance creates huge problems in overall neurological development, as the brain's anatomy, chemistry and pathways become permanently altered and impaired. Young children who are exposed to violence through TV and video games are in a high state of adrenalin and stress, as the body does not know that what they are watching is not real. Children who overuse technology report persistent body sensations of overall "shaking", increased breathing and heart rate, and a general state of "unease." This can best be described as a persistent hypervigalent sensory system, still "on alert" for the oncoming assault. While the long term effects of this chronic state of stress in the developing child are unknown, we do know that chronic stress in adults results in a weakened immune system and a variety of serious diseases and disorders.

It's important to come together as parents, teachers and therapists to help society "wake up" and see the devastating effects technology is having not only on our child's physical, psychological and behavioral health, but also on their ability to learn and sustain personal and family relationships. While technology is a train that will continually move forward, knowledge regarding its detrimental effects, and action taken toward balancing the use of technology with critical factors for development, will work toward sustaining our children. While no one can argue the benefits of advanced technology in today's world, connection to these devices may have resulted in a disconnection from what society should value most, children. Rather than hugging, playing, rough housing, and conversing with children, parents are increasingly resorting to providing their children with more TV, video games, and the latest iPads and cell phone devices, creating a deep and irreversible chasm between parent and child.