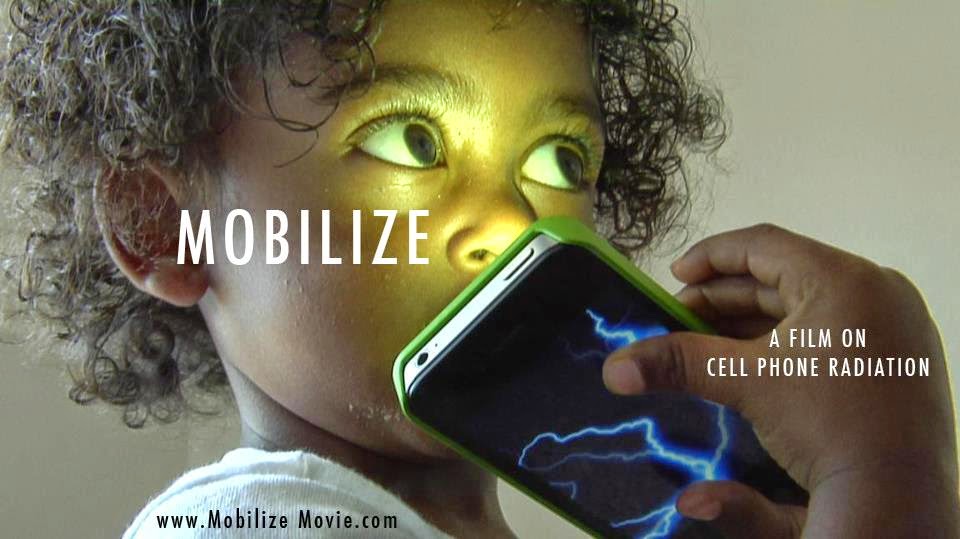 “A CALL FOR ACTION”
by Emily Hunt and Isabel Fondevila

When East Bay father Alan Marks pegged his brain tumor on cell phone usage a few years ago, the issue of cell phone radiation had its brief moment in the limelight. But the media focus eventually fizzled out. And with so many friends to talk to, deals to make, lunch dates to plan, and distant relatives to keep at bay, our reliance on phones wasn't so easily put on hold.

But some kept their eyes on the story. One of these on lookers was independent filmmaker and community activist Kunze, who was deeply affected when a college classmate told him about his father’s brain cancer. Kunze later teamed up with Nobel Prize-winning author and scientist Devra Davis to make a documentary on the issue and its rather serious implications. The film picks up the story at the industry's initial boom in 1993.

Mobilize interviews experts hailing from Yale, Stanford, UC Berkeley, and UCLA. Apple co-founder Steve Wozniak and California Senators Mark Leno and Leland Yee offer their thoughts on the matter, and Kunze digs up the stories of multiple brain tumor sufferers, whose stories went oddly uncovered by the media. Though the potential for brain cancer was a projected side-effect that's been discussed since the promulgation of mobile phones, more and more studies are popping up that suggest the long-term usage of devices cause DNA damage, blood-brain barrier damage, breast cancer, sperm reduction, and infertility.

San Francisco's own history with cell phone health has been an intense one. The Right to Know Act of 2010 required cell phone retailers post information about possible health risks associated with phone usage. However, the bill came under fierce attack from the telecommunications industry. We connected with Kunze to discuss cell phone radiation and what is currently happening legislatively.

Isabel Fondevila: What motivated you to make this film?

Kevin Kunze: I became motivated to make this film when I started to hear from brain tumor patients about their experiences and how many of them and their family strongly believe their cancer was caused from long-term cell phone use.

IF: What was the biggest challenge during production?

KK: The lack of funds and realizing the pervasiveness of cell phones within our media — both newspapers and the film industry. Just look at any major film festival and you’ll see a cell phone sponsor. It didn’t used to be like that ten years ago.

IF: What did you learn making the film?

KK: Whenever I make a film I’m trying to answer a question for myself and the filmmaking is a way of understanding more. After interviewing over 50 experts, I’ve learned to always follow my instinct and that sometimes it’s an advantage to have only one person behind the camera instead of an entire crew. For instance, when interviewing Steve Wozniak, I don’t think he would have been so candid with his answers if I had a ton of people and equipment.

IF: You interviewed politicians such as Gavin Newsom, Mark Leno, and Dennis Kucinich. What are they doing to protect our health? Is anything holding back their efforts?

KK: They are doing the best they can to protect our health by trying to pass bills on multiple levels: national, state, and city. Unfortunately there are several speed bumps along the way. For instance, one of the major ones has been lobbying. Using multiple websites such as MapLight, we’ve been able to see that telecommunications industries have given Senators in California substantial amounts of contributions to vote no on certain safety bills. In fact, recently the LA Times ran an article showing AT&T has been the biggest lobbyist in California for the past 7 years.

IF: What’s going on with San Francisco’s legislation?

KK: Three years ago when Gavin Newsom and the SF Board of Supervisors passed a Right to Know bill, which would use information found in fine print in cell phone manuals and make it more apparent by putting it on the box. The cell phone industries sued the city claiming it goes against their freedom of speech or First Amendment rights as corporations. The lawsuit ended up in courts for years, which gave the cell phone industry an edge. After building up large attorney fees, they offered the city Supervisors an ultimatum. If the city continues to fight in court and loses the lawsuit they would have to pay the expensive legal fees for the cell phone companies. The alternative, drop the legislation and the legal fees will disappear. That’s what the city decided to do.

IF: You interviewed John Walls from CTIA, the telecommunication lobbying organization that filed a lawsuit against San Francisco for passing a cell phone safety bill. What was it like to meet him?

KK: It was a little intimidating. The only reason he did the interview in the first place is because I went around the entire CTIA event trying to get spokesmen from different cell phone companies to address the fine print information in the manuals and to speak about the San Francisco lawsuit. The building where they held the convention was huge too. It’s actually the same one they hold Comic Con, in San Diego, so it was massive. Finally, we were asked to stop filming and direct our questions to the CTIA’s spokesperson, who as it turns out used to be Fox Sports anchor.

IF: Do you hope your film encourages people to take action? If so, what?

KK: I hope so. Using a cell phone safely is actually really easy. All you have to do is keep it away from your body and use a wired headset or speakerphone. And most cell phones nowadays come with a headset anyway because it protects the manufacturers against health liabilities. But beyond just looking out for your self I think people have a responsibility to look out for each other. Instagram, Twitter, Facebook – these are all great tools for communicating information about this issue. And once the public is informed, industry will have to become more accountable.