UPDATE (7 July): The Swiss popular initiative for mobile phone accountability was handed over to the Chancellerie in Bern on 5 July 2021. The final count of signatures was 92,000, just 8,000 short of the 100,000 required to launch a referendum.  A big "thank you" to all those who collected the signatures.
Why the initiative? (translation) 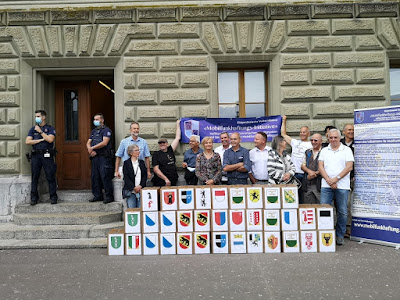 Because the Confederation does not protect us
The Confederation has no interest in protecting the population from health damage caused by mobile telephony, since it owns 51% of the shares of SWISSCOM. Thus, economic interests take precedence. So far it has suggested that the operator of a mobile telephone station is not responsible if this station is operated fairly according to the legislation in force (limit values).
Because limit values ​​do not protect us
The limit values ​​only protect against heat caused by mobile telephony within 30 minutes. Long-term effects exceeding 30 minutes and all biological effects, up to cancer, are not taken into account. Just as the harmfulness of radioactive radiation cannot be measured and determined with a thermometer, so can the harmfulness of mobile phone radiation.
Because no one can be against
Those who claim that the damage caused by mobile telephony has not been proven should all the more sign here, because it is only a question of responding to the damage actually caused.
Because the new generation of 5G mobile telephony means a huge increase in transmitting stations and radiation exposure
More than 180 doctors and scientists from 35 countries have signed a moratorium asking to stop the development of 5G technology until the potential health risks are clarified.
Because the damage caused by mobile telephony is known
Biological effects due to radiation from mobile telephony, such as headaches, sleep disturbances, exhaustion, can be proven; and the agglutination of red blood cells after 3 minutes of telephone call. Many studies have proven health problems in humans and animals already after the commissioning of a 2G antenna near a farm. As soon as the antenna is removed, the calves are healthy again. For a “normal” level of exposure to mobile phone waves, plant growth is already hampered, which anyone can test with watercress, for example.
Because the polluter pays principle also applies to damage caused by radiation from mobile telephony
Through the “reversal of the burden of proof”, the operator of a transmitting station must answer for damage caused to people and material goods within the measurable perimeter of the transmitting station.