The Book "Phonegate" in English Is Released Today 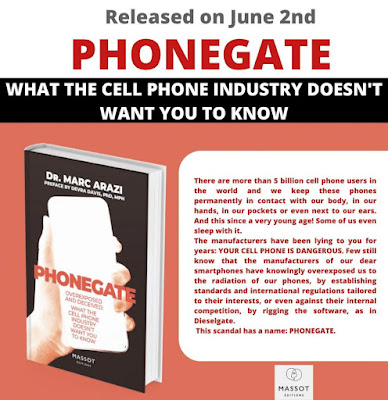 It is with great pleasure that we announce the release of the English version of the book Phonegate by Dr Marc Arazi. Many thanks to Devra Davis for prefacing the book and for her support in this difficult struggle for the truth. Thanks also to Regan Kramer who translated the French version and to Meris Michaels. And of course to the whole team at Massot Editions, starting with Florent Massot, who is accompanying us with courage and determination to have this international health and industrial scandal recognised.

The paper book is now available for sale on Amazon :

We will need your help to make it known as widely as possible. Thank you in advance!
PHONEGATE
What the cell phone industry doesn’t want you to know
Summary

There are more than 5 billion cell phone users in the world and we keep these phones permanently in contact with our body, in our hands, in our pockets or even next to our ears. And this since a very young age! Some of us even sleep with it. The manufacturers have been lying to you for years: YOUR CELL PHONE IS DANGEROUS. Few still know that the manufacturers of our dear smartphones have knowingly overexposed us to the radiation of our phones, by establishing standards and international regulations tailored to their interests, or even against their internal competition, by rigging the software, as in Dieselgate. This scandal has a name: PHONEGATE.
In 2016, Dr. Marc Arazi obtained proof that enabled him to denounce this fraud. With the help of brave men and women the world over – doctors, lawyers, politicians, scientists, friends and devoted volunteers from all walks of life — he has been fighting to bring the truth to light ever since. In 2018, the NGO Phonegate Alert was founded to support them in that task. The issue gained some prominence in the U.S. after Chicago Tribune reports by Pulitzer-prize winning journalist, Sam Roe. Dr. Arazi has addressed the European and Italian Parliaments, the U.S. National Toxicology Program, Environmental Health Trust, and other forums regarding this issue.
After reading the book, you will be eager to change your habits and especially those of your children. A few simple gestures can protect your health and that of your loved ones. You will also understand why a moratorium is necessary by public authorities in the face of the forced deployment of 5G. We can no longer trust the cell phone industry with our eyes closed!

THE ALERT IS LAUNCHED : Become an actor of change
THE AUTHOR

Translated from the French by Regan Kramer