Addicted to Your Cell Phone? Here's What You Need to Know 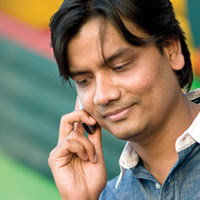 Addicted to your cell phone?
by Zeenia Baria, The Times of India, 24 May 2013

Here's what you need to know...

While cell phones have become an indispensable part of our lives, over-attachment and over-dependence on them can spell doom for your health. Here, experts reveal why too much usage can cause you more harm than good...

Reduces sperm count
Gynaecologist and infertility specialist Dr Nandita Palshetkar says that the high-frequency electromagnetic radiation that cell phones emit may be associated with increased risk of brain tumours. "However, other tissues in the body such as the testes may also be sensitive to these cell phone-radiofrequency electromagnetic fields. Cell phone fields, because of their frequency and intensity, are prone to increasing temperature in tissues close to where they are used. Men who use hands-free devices tend to carry their cell phones in their pants pocket or clipped to their belts at the waist while in talk mode. As a result, they may be exposing their testicles to damaging radiofrequency electromagnetic waves. When placed close to the testes, such as in a pocket or on the hip, cell phones have been found to be associated with reduced sperm motility and concentration. Even cell phones that are at rest are emitting signals as they constantly monitor the airwaves for a signal. This seemed to be more associated with the length of time in the proximity of the testes," says Dr Palshetkar.

Researchers in the US showed that radiofrequency electromagnetic waves emitted from cell phones can impair sperm quality. They collected semen samples from 32 men and divided each man's sample into two parts. They placed half of the semen samples 2.5 centimetres away from a 850 MHz frequency cell phone in talk mode for one hour. They chose this distance because it is the typical distance between the testes and the trouser pockets. Semen exposed to radiofrequency electromagnetic waves emitted from cell phones had higher levels of damaging free radicals, lower sperm motility (the ability of the sperm to move and swim) and sperm viability (the percentage of live sperm), and possibly greater oxidative stress, the study shows. There were no significant differences in DNA damage between the exposed and unexposed groups. Future studies will determine if there is dangerous emission when the phone is in silent or standby mode. The emission may be smaller than when in talk mode, but could it still be harmful if it reaches the testes, say researchers.

Risk for people with pacemakers
Interventional cardiologist Dr Suresh Vijan says that cell phones and portable media players produce measurable electrical and magnetic fields. But the strength of these fields will not affect ordinary heart rhythm or function, studies suggest. "Various experts have also looked at whether cellphones can present a danger to those with an implanted pacemaker, internal defibrillator or a similar device. The results, for the most part, have been reassuring. Problems may be most likely to arise when pacemakers and defibrillators are being programmed or reset by medical staff. Spurious signals from consumer gadgets may interfere with settings. Cellphones should therefore always be turned off under these circumstances. Such signals could interfere with everyday function of heart devices as well. The good news is that the laws of physics dictate that the strength of the fields generated by cellphones and other electronic players falls rapidly with distance from the source. What this means is, if you double the distance from the source, for example, the field force drops four-fold (two squared), not just two-fold. Wee recommend that that those with implanted devices such as pacemakers or defibrillators keep their cellphones at least six inches from the generator to minimise potential interference.

Hurts the joints
Joint replacement surgeon Dr Nirad Vengsarkar says that when one overdoes texting, finger joints start aching and in worst case scenarios, there is even an early onset of arthritis, especially in the interphalangeal joints of the thumbs. "There has been a steady rise in the number of patients who complain of pain in the fingers, with discomfort even travelling to the arms in some cases. Some people even complain about neck pain because they tend to hold the phone between their ear and shoulder while they work. Others use incorrect postures to sit and text. All these have increased the number of patients who suffer from joint pain. I would advise people to avoid texting continuously for hours because in the long run, it will do them a lot of harm."