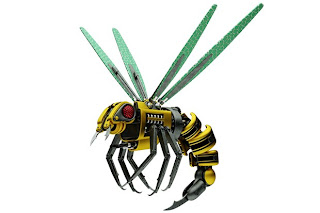 The Harvard Microrobotics Lab has been working on its Micro Air Vehicles Project since early 2009. Borrowing from the biomechanics and social organization of bees, the team of researchers is undergoing the creation of tiny winged robots to fly from flower to flower, immune to the toxins dripping from petals, to spread pollen. They even believe that they will soon be able to program the robobees to live in an artificial hive, coordinate algorithms and communicate amongst themselves about methods of pollination and location of particular crops.

Of course, published reports from the lab also describe potential military uses—surveillance and mapping—but the dime-sized cyber-bees have yet to be outfitted with neurotoxin tipped stingers.


If you think this bee news is strange, be sure to check out this recent article from the newswire: Anarchist Beekeepers Claim Responsibility for U.S. Drone Attack