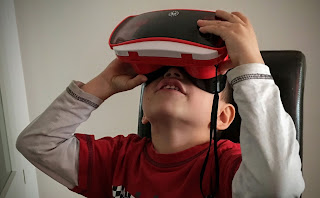 The Dangers of Wireless Virtual Reality Headsets - Part 1
Towards Better Health, 15 May 2016

There have been a lot of articles on virtual reality headsets, but very few about the dangers, especially for children.  One article in a Swiss newspaper says that manufacturers will soon be making headsets for children.  This is yet another - and very worrying assault - on the health of young people, who are much more vulnerable to the risks of microwave radiofrequency radiation-emitting devices such as these headsets.  We wish to make more visible the warnings concerning use of these devices in a series of posts.

Here is the first one:  the health and safety information contained in the 60-page user's manual for the Samsung Gear VR headset:  How many times have we heard of teachers in schools giving such devices to children?  Or, of elderly persons using these devices?  The manual says children under age 13 should not use this device because they may be at "increased health and safety risk".  The manual also recommends that you should "consult with a doctor before using the device if you are pregnant, elderly, have psychiatric disorders, suffer from a heart condition, have pre-existing binocular vision abnormalities or suffer from a heart condition or other serious medical condition."

Disappointingly, in mentioning microwave radiofrequency emissions, the manual only considers interference with  the operation of nearby electronics, including implanted medical devices such as cardiac pacemakers.

Page 3:
Warning! This product contains chemicals known to the State of California to cause cancer and reproductive toxicity.

Ensure that you have read the warnings below carefully before using the Gear VR to reduce the risk of personal injury, discomfort, or property damage.

• The Gear VR should not be used by children under the age of 13. Watching videos or playing games with the Gear VR may affect the visual development of children.
• When children, age 13 or older, use the Gear VR, adults should limit their usage time and ensure they take frequent breaks.   Adults should monitor children closely after using the Gear VR if children feel discomfort.

Before using the Gear VR headset

• People who are prone to motion sickness in the real world also have a heightened risk of experiencing discomfort while using the Gear VR. Such individuals should take extra care to read and follow these warnings carefully.
• We recommend consulting with a doctor before using the Gear VR if you are pregnant, elderly, have psychiatric disorders, suffer from a heart condition, have pre-existing binocular vision abnormalities or suffer from a heart condition or other serious medical condition.
• Do not use the Gear VR if you have symptoms of squint, amblyopia, or anisometropia. Using the Gear VR may aggravate these symptoms.
• Do not use the Gear VR when the attached mobile device is hot as this may cause mild burns. To prevent any injuries, take frequent breaks when using the Gear VR.
• Make sure the Gear VR is level and secured comfortably on your head, and that you see a single, clear image. If you wear the Gear VR tilted to one side, you may feel discomfort.
• Just as with the symptoms people can experience after they disembark a cruise ship, symptoms of virtual reality exposure can persist and become more apparent hours after use. These post-use symptoms can include the symptoms above, as well as excessive drowsiness and decreased ability to multi-task. These symptoms may put you at an increased risk of injury when engaging in normal activities in the real world.

Seizures
Some people (about 1 in 4000) may have severe dizziness, seizures, epileptic seizures or blackouts triggered by light flashes or patterns, and this may occur while they are watching TV, playing video games or experiencing virtual reality, even if they have never had a seizure or blackout before or have no history of seizures or epilepsy. Such seizures are more common in children and young people under the age of 20. Anyone who has had a seizure, loss of awareness, or other symptom linked to an epileptic condition should consult with a doctor before using the Gear VR.

General Instructions and Precautions
• Use only in a safe environment. The Gear VR produces an immersive virtual reality experience that distracts you from and blocks your view of your actual surroundings. Always be aware of your surroundings when using the Gear VR and remain seated at all times. Take special care to ensure that you are not near other people, objects, stairs, balconies, windows, furniture, or other items that you can bump into or knock down when using — or immediately after using—the Gear VR headset. Do not handle sharp or otherwise dangerous objects while using the Gear VR. Never wear the Gear VR in situations that require attention, such as walking, bicycling, or driving...

• A comfortable virtual reality experience requires an unimpaired sense of motion and balance. Do not use the Gear VR when you are tired, need sleep, are under the influence of alcohol or drugs, are hungover, have digestive problems, are under emotional stress or anxiety, or when suffering from cold, flu, headaches, migraines, or earaches, as this can increase your susceptibility to adverse symptoms.

• Listening to sound at high volumes can cause irreparable damage to your hearing...

• Stop using the Gear VR if it seems to be hot. Prolonged contact with an overheated device can cause burns...

• Do not use the Gear VR while in a moving vehicle such as a car, bus, or train, as this can increase your susceptibility to adverse symptoms.

• Repetitive Stress Injury. Prolonged use can make your muscles, joints or skin hurt. If any part of your body becomes tired or sore while playing, or if you feel symptoms such as tingling, numbness, burning or stiffness, stop and rest for several hours before playing again. If you continue to have any of the above symptoms or other discomfort during or after play, stop playing and consult a doctor.

• Radio Frequency Interference. The Gear VR headset, when coupled with the mobile device, can emit radio waves that can affect the operation of nearby electronics, including cardiac pacemakers. If you have a pacemaker or other implanted medical device, do not use the Gear VR without first consulting your doctor or the manufacturer of your medical device.

Page 52:
Your mobile device is not a toy. Do not allow children to play with it because they could hurt themselves and others, damage the mobile device, or make calls that increase your mobile device bill. Keep the mobile device and all its parts and accessories out of the reach of small children. The Gear VR headset should not be used by children under the age of 13, as these children may be at increased health and safety risk. Adults should monitor children (age 13 and older) who are using or have used the Gear VR for any of the symptoms described below, and should limit the time children spend using the Gear VR and ensure they take breaks during use. Prolonged use should be avoided, as this could negatively impact hand-eye coordination, balance, and multi-tasking ability. Adults should monitor children closely during and after use of the Gear VR for any decrease in these abilities.