Statin Use Associated with a 27% Increased Risk of Cataracts 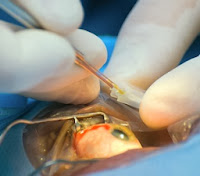 Pharmaceutical companies have been able to downplay the risk of cataracts associated with statins for 25 years. Very few physicians ever mention this as a complication of statin therapy.

A new study published in JAMA Ophthalmology (online, Sept. 19, 2013) titled: "Association of Statin Use with Cataracts." Texas researchers compared 6,972 statin users to 6,972 nonusers.  The authors concluded: "this study found statin use to be associated with an increased risk for cataract." Specifically, they found a 27% increased risk of cataracts in statin users.


Statins and Cataracts: Why Did It Take So Long to Uncover This Connection?
People's Pharmacy, 22 September 2013

Lovastatin was the first of the new-generation statin-type cholesterol-lowering drugs on the market. It was approved by the FDA for sale in 1987. Even before the drug was approved, however, studies in dogs suggested that lovastatin might trigger cataract formation. A review in the journal Pharmacotherapy in 1987 titled "Lovastatin: A New Cholesterol-Lowering Drug" noted:

"The most common adverse effects are gastrointestinal, while the most serious are elevated transaminase levels and the potential for lens opacities."


"Lens opacities" is another way of saying cataracts.

For reasons that remain somewhat mysterious, drug companies have been able to downplay the risk of cataracts associated with statins for 25 years. Very few physicians ever mention this as a complication of statin therapy. We suspect that if you asked most cardiologists, internists or family practice physicians about this side effect you would get a deer-in-the-headlights stare or a shrug.

The cataract connection began to get traction when a large British study (BMJ, May 20, 2010) involving over 2 million patients detected a signal. The authors reported that "Each statin was associated with an increased risk of cataract in both men and women... After stopping treatment the risk of cataract returned to normal within a year in men and women."

In June 2013 a study was published in the journal Drug Safety titled: "Statin Use and Cataract Surgery: A Nationwide Retrospective Cohort Study in Elderly Ethnic Chinese Patients." The analysis of 50,000 individuals enrolled in the National Health Insurance Database of Taiwan suggested that people taking statins were approximately 20 percent more likely to undergo cataract surgery than those not taking such drugs.

Now a new study has been published in JAMA Ophthalmology (online, Sept. 19, 2013) titled: "Association of Statin Use with Cataracts." Texas researchers compared 6,972 statin users to 6,972 nonusers.

The authors concluded: "this study found statin use to be associated with an increased risk for cataract." Specifically, they found a 27% increased risk of cataracts in statin users. They go on to caution their colleagues that "The risk-benefit ratio of statin use, specifically for primary prevention, should be carefully weighed, and further studies are warranted." That's more doctor-speak. We interpret that to mean that the evidence that statins will prevent a first heart attack ("primary prevention") is weak at best, and you all had better think twice about prescribing these drugs for otherwise healthy folks.

These days most people don't think twice about cataracts. But clouding of the lens is a primary cause of poor vision and blindness in the U.S. The annual cost is nearly $5 billion. And not all cataract surgery goes smoothly. Some people are left with poor vision even when everything goes according to plan.

WHAT'S BEHIND STATINS AND CATARACTS?

Here is something most doctors should know, but seemingly have forgotten. The lens of the eye requires cholesterol to stay healthy and transparent. Without adequate cholesterol, specialized epithelial cells in the eye cannot grow normally. Animal studies have demonstrated that interfering with cholesterol synthesis in the eye increases the likelihood of cataracts. People who have naturally low cholesterol levels because of their genetic makeup are at greater risk of developing cataracts. So many of the puzzle pieces are starting to fit together.

The evidence is accumulating that statins are linked to cataracts. For people who have heart disease, have experienced a heart attack or have stents in coronary arteries, the benefits of drugs like atorvastatin (Lipitor), lovastatin (Mevacor), pitavastatin (Livalo), pravastatin (Pravachol), rosuvastatin (Crestor) and simvastatin (Zocor) may well be worth the risks. Those who are otherwise healthy should discuss these new findings with a physician. Cataracts are not a trivial side effect.