Electrosensitivity Finally Recognized as a Disease? 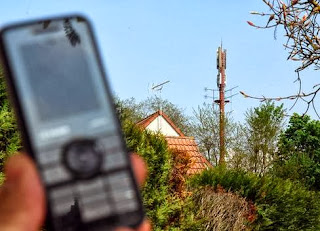 Electrosensitivity finally recognized as a disease ?
by Philippe Samzun, lanouvellerepublique.fr, 5 November 2013 (translated from French by the Editor of this blog)

Electrosensitive for more than 10 years, a person from the Touraine region has just been acknowledged as a disabled worker. Testimony.

A graphics designer in Tours, Véronika has just been acknowledged as a disabled worker by the Departmental Home for Handicapped Persons (MDPH) because of her electrosensitivity. “A first in Indre-et-Loire and without doubt in the Central Region,” says Emmanual Denis, departmental delegate for the association Robin des Toits.

Aged 56, this person from the Touraine region has been able to avail herself of a medical certificate dating from last April, issued by a physician in Nantes, specialized in professional and environmental pathologies.

An impaired social and professional life

Dr. Dominique Dupas indicates that Véronika “presents a clinical picture wholly characteristic of an idiopathic environmental intolerance to electromagnetic fields.” He adds that this condition, which belongs to the group of medically unexplained diseases, is very disabling for social and professional life. “Patients with this condition present difficulties of access to or keeping a job such that they justify in my view the attribution of handicapped worker,” concludes the physician.

And in fact, this patient who suffers from headaches, asthenia, loss of concentration and memory, feeling of constriction in the head, dizziness, burning sensations, nausea, sleep disturbances, is no longer able to continue to work in front of her computer screen.

According to Véronika, the recognition of handicapped worker constitutes a major step forward. She deplores, however, the fact that the personalized compensation plan which has been proposed to her refuses an invalidity card, disability compensation benefits, the allowance for adults with disabilities, and explains that three years ago, she joined a job cooperative in order to try to exercise her profession, whilst taking account of her handicap.

A testimony which, according to Emmanuel Denis, takes on more value today due to the fact that « the French national health agency [ANSES] has just issued a mixed report on the subject, whose conclusions go against those of the World Health Organization.”

The Robin des Toits delegate insists that his association has never, over the past year, been so much solicited by persons with this pathology and announced the creation by the end of the year of a group of electrosensitive persons in Touraine.

« The report of ANSES is a political report, good for throwing in the garbage can of History”, considers Prof. Belpomme. Director of the European Cancer and Environment Research Institute, he reacted to the national health agency document in mid-October, which updated the study undertaken in 2009 on the eventual harmfulness of radiofrequencies. Five years later, the Agency still does not recommend a lowering of the thresholds of actual exposure. It considers moreover that it is impossible to conclude that the observed biological effects give rise to health effects.

Robin des Toits is also speaking out about the conclusions of the report published by ANSES : “it comes just at the time when 4G is being deployed in France”. The association is thus going to intensify its vigilance. Moreover, it welcomes a charter of good conduct endorsed by elected officials and associations which could also be signed by mobile phone operators in Tours.