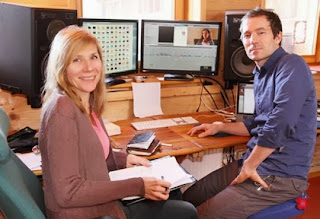 “[Electrosmog] will probably be the next big public health scandal because everyone is exposed. It is important that each user takes precautions to be taught to young people to use these technologies with sense.”

Faced with the construction of a telephone relay antenna in front of their homes and anxious to know if they were at risk for their health, these two people have traveled Europe to understand the environmental issues presented by this technology.

Through interviews with several whistleblowers, including citizens, journalists, and scientists, this film reveals how, like the tobacco industry, the lobby of the mobile phone industry has built a strategy of “product defense” by artificially creating a scientific doubt about the harmful effects of electromagnetic waves.

The new documentary film is about 1 hour 30 minutes in length and is being shown this month (November 2013) at a film festival in Europe. Below is the trailer for the new documentary film, … in French, for those who are fluent in the French language. SkyVision Solutions had the audio transcribed in English and added English captions (subtitles) to the film trailer.

[Although there are currently no known restrictions on the use of this video trailer, it is nevertheless presented as material that may contain content subject to the Fair Use Doctrine under 17 U.S.C.]

When Breitenbach valley (Munster) residents refused an antenna near their homes, the mayor assured his countrymen that there was no problem in view of the formal research. The village doctor has documented however that “the waves can alter the functioning of cells, induce cancers,” which he explained to the villagers.

Among them, Jean Hèches a documentary filmmaker, wondered “why so much controversy”? To find out why, he set to work with journalist Nancy Meritens. For two years they recorded scientific conferences, interviewed many experts in France, Germany, Switzerland, Sweden, decrypted and verified masses of information. A long investigative work that allows them to explain “the defense strategy of products” already used by the tobacco industry, asbestos … They show how public health agencies and the WHO (World Health Organization health) are infiltrated by “scientific mercenaries” paid by the industry to demonstrate that there is no risk, “to fabricate lies” to denigrate studies that may show adverse effects. … In Sweden they have testimony from a couple of electrosensitives, a former engineer of the mobile industry and his wife suffering to the point of not being able to live in the city. “Sweden is fifteen years ahead of France in the implementation of these new technologies. Electrosmog is permanent,” they said. “This will probably be the next big public health scandal because everyone is exposed. It is important that each user takes precautions to be taught to young people to use these technologies with sense.”

The source link for a portion of this blog posting (with Google translation) is: http://www.lalsace.fr/actualite/2013/11/05/telephone-mobile-et-nocivite-ou-la-fabrication-du-mensonge.