Dangers of 5G: From the Horse’s Mouth 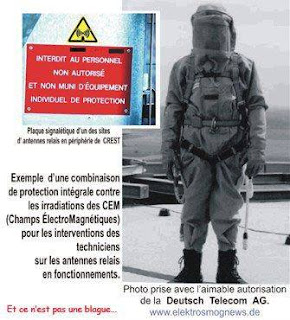 Dangers of 5G: From the Horse’s Mouth
reginameredith.com, 24 August 2016

(Photo): Example of full-body protective clothing against  irradiation from electromagnetic fields during  intervention of Deutsche Telecom technicians working on mobile phone antennas in operation.  The following conversation with the AT&T technician reveals that where the company once turned  off transmitters while technicians worked on them, it now refuses to turn them turn and does not allow its technicians to carry RF meters. "Lots of us in this line of work are getting leukemia and cancer," comments the AT&T technician. (Choice of photo by Editor of "Towards Better Health")


Josh del Sol is a tireless warrior informing the public about the health impacts of RF, EMF and other ubiquitous frequencies. His documentary Take Back Your Power is foundational to understanding the problem. Today, I received an email from him regarding a spontaneous conversation another activist had with an AT&T line-man working on a cell tower. I have copied the conversation below. Meanwhile to have a deeper understanding of this truly menacing issue, you can go to openmindsshow.com to see my interview with him. You can also watch his documentary mentioned above. Meanwhile, this should put it in perspective for you:

I saw the AT&T trucks today, the guys were working on the cell towers. I’ve been wanting to talk to them for months but I never get a chance to talk to them.

So I walk over there today and just then a guy comes down and says “Hey”.

So I said “Hey man, do you mind if I ask you some questions about the cell towers?”

He said “Sure thing, go ahead”, real friendly.

I then asked a bunch of technical questions about the design of the towers and stuff, just saying I was fascinated by the technology. He answered them and I learned a bunch of stuff. He mentioned that the round antennas are higher frequency microwaves.

Then he said that the US is soon going to 5G, Korea (I think) is already going to 5G and “they’re ahead of us”, but that “lots of countries are holding off on 5G because of environmental concerns and health concerns”.

He said, “Yeah, and the head of the FCC recently said ‘We’re not going to let research slow us down.’”

I said “Wow, he said that? That’s really bold.”

So I said, “Are you interested in the health concerns from this stuff?”

Him: Really? Lots of us in this line of work are getting leukemia and cancer.

Me: I’ve been interested in it for a while because I work here, so close to two towers.

Me: Yeah I’ve seen them!

Me: Really? Man you’re right in front of those things!

Him: Yeah, and they’re not turning them off anymore. I’m just getting blasted.

Me: I’ve got a meter and I get readings at this school of 10-20 mW/cm2 per channel. And a cell tower has like 70 channels right?

Him: You have a RF meter? (He couldn’t believe it).

Me: Yeah! I drive around town and see what the levels are like.

Him: How much was it?

Him: No way… Like I said, they forbid us from having them now.

Me: So I just looked up the federal limits on Saturday. It says the federal limit is 10 mW/cm2. On this playground I’ve gotten a reading of 15 mW/cm2 on one channel… but the cell tower puts out 70 something channels, does that mean it’s putting out roughly 15×70 mW/cm2?

Him: Most likely, yeah. Yeah all of us are worried about it. It’s high enough levels to heat things up. My face burns whenever I use a cellphone.

Me: Everybody at the school is always hot, even when the air is cold.

Him: Really? The industry people are actually worried that 5G is going to have a really big, even more noticeable thermal presence because the high frequencies have so much more power in them.

Me: Great talking to you!