The petition launched by the Phonegate Alert Association has recently been updated. If you haven't already signed it, please do so. Your support for this public health issue is essential!  Thank you.
(Anyone in the world can sign.  The updated text will be translated into other languages.)
Link to Petition:
https://www.change.org/p/ms-el%C5%BCbieta-bie%C5%84kowska-protect-the-health-of-millions-of-mobile-phone-users?lang=en-US
Protect the health of millions of mobile phone users
Phonegate Alert Association
Dear Friend, 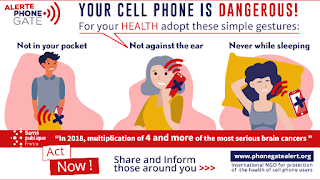 At the same time, at international level, we have been invited to denounce this new scandal, Phonegate, in the European Parliament, the Italian Parliament, at scientific conferences in the United States, Germany, United Kingdom, Spain, Poland, etc.

We have, on each occasion, reported to the government authorities, with supporting evidence, the deliberate deception of the mobile phone industry regarding the regulations governing the measurement of specific absorption rates (SAR).

As a direct consequence for our health, for more than 20 years, hundreds of millions of people have been victims of overexposure to the waves emitted by our mobile phones.

We have urged government authorities to act urgently to protect the health and safety of millions of mobile phone users in France, Europe and internationally.

Since June 2018, we have been calling for the withdrawal from the market of more than 250 mobile phone models, including some of the best-selling ones.

In October 2019, a new report from the French health agency (ANSES) confirmed the legitimacy of our requests.

In a press release at the end of October 2019, the French Government even announced, among other things, the setting up of discussions with manufacturers and an intervention in the European Commission.

Since then nothing has been done!

And there is no way the outbreak at Covid-19 can justify such inertia. Quite the contrary.

At the same time, the public authorities want to launch 5G as soon as possible. Once again, without waiting for the response from the health agencies on the potential health risks involved and on the implementation of a regulation that truly protects users.

Your mobilization and support for this public health issue are essential!

Thank you in advance for your commitment.

Main actions of our NGO

► After a long legal battle of almost two years with the French National Frequencies Agency (ANFR), which is in charge of controlling mobile phones on the French market, we have obliged it to make public very important tests indicating the models and brands that exceed the regulatory exposure thresholds that the agency wanted to keep secret.

► We have achieved a first breakthrough, with the withdrawal of 4 mobile phones from the French market, as well as updates for 19 other mobile phone models (23 in total by July 2020). See the interview of Dr Arazi by journalist Jean-Jacques Bourdin.

► We have launched the first wave of a nationwide alert and mobilization to warn citizens of the dangers of keeping mobile phones in contact with the body. See our campaign to raise awareness of the essential gestures to protect users’ health.

► With a team of specialized lawyers and jurists, we have set up large-scale legal actions in France, Europe and internationally. About ten criminal and class actions are underway against manufacturers such as Apple, Samsung, Xiaomi, Nokia, etc...
https://www.change.org/p/ms-el%C5%BCbieta-bie%C5%84kowska-protect-the-health-of-millions-of-mobile-phone-users?lang=en-US
Publié par MerisRM à l'adresse 8:30 PM