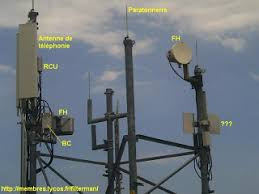 Since 2003, symptoms multiplied, described in numerous sites on the Internet by electro-sensitive persons and in epidemiological studies:


Dizziness, nausea, vomiting, rise in body temperature, tachycardia, feverish state with waking up in sweat, mycoses on the feet, aching in the upper part of the neck, circulatory troubles, terrible itching, chronic sinusitis, trembling of hands, a problem of mobility, pain in the limbs, especially in the kidneys.  Ringing in the ears, blood in the stool which led to an endoscopy with nothing found.  The doctor told me that the only possible cause was cocaine, but I never touched this!


I lost my appetite.  I lost 8 kg in 8 years.  I had concentration and memory problems, sometimes blanks, holes in my memory.  I had to go to a public park to study.  Frequent incidences of dyslexia.  Another thing comes to mind – all my dental fillings fell out between the year 2000 and the present.


Dogs exhibited abnormal behavior, not wanting to climb the last floors; one was seized with trembling and panic.

I had never mentioned these health problems to the doctor treating me at the time, for fear of being taken for mentally ill.  He told me that he would never have believed I had had a heart attack if I had not shown him the hospital records.  I explained to him that the heart attack was related to the antennas placed just above my bed.  He advised me to move.  The veterinarian had suggested the same thing.
Since 4 June 2006, I have been living with my girlfriend, deserting my home that I only visit in order to water the plants and collect my mail.

My girlfriend stayed in my apartment every weekend from Friday to Sunday. She lost our child when two months pregnant in 2005 for the second time.  The same thing had happened a year previously.  I know, moreover, that a neighbor also lost her child following a miscarriage that doctors were unable to explain.

In the same building, several persons experienced identical health problems.  A 25-year-old woman was pulling out clumps of hair, which left bald spots.  This reminds me that I lost a lot of hair, as did my dogs all year long.

Family relationships were not great.

The electrical devices experienced damage and dysfunction throughout the apartment, including in the elevator.

Finally, I’d like to say that I have always believed that mobile phone technology was harmless, from reading the newspaper, watching TV, listening to the radio and reading the tons of publicity which was placed regularly into my mailbox.  Women and men are grinning from ear to ear at their cell phones, which inspire confidence, happiness, well-being, freedom …

Following my heart attack and my girlfriend’s two miscarriages, I became afraid.  I questioned my neighbors.  Gradually, tongues loosened.  A lady died in the building, who had repeatedly said to her husband, « It is the antenna that is destroying me ».

Following all these incidents, I consulted the Internet and fell on associations which are denouncing this state of affairs.  They are fighting tooth and nail.  In opposition is the big money of the industry which buys everyone and the authorities who are incapable of reacting.

My question:  In addition to the intolerable and real assault on health and well-being that this technology is causing, how many deaths will be necessary before measures are taken?”

(Marc Filterman, who placed this testimony on his Website, comments that Jean-Luc’s problems coincided with the beginning of the World Cup when UTMS mobile phone technology, also called 3G, allowed viewing of images, extracts of football matches on cell phones etc.  His apartment building was located near the take-off axis at Geneva’s airport.  Health problems are more frequent when there are both mobile phone and airport installations.  It is likely that the powerful signals from the airport installations, such as radar, oblige relay antennas to increase their power.)

I thank Marc Filterman, member of the Scientific Committee of CRIIREM (Centre de Recherche et d'information Indépendant sur les Rayonnements Electromagnétiques non ionisants) for having given me the permission to place this testimony on my site. You may read the full text here (in French). [We are sorry that this text is no longer available since the Website has been changed.]
Publié par Anonymous à l'adresse 4:47 PM