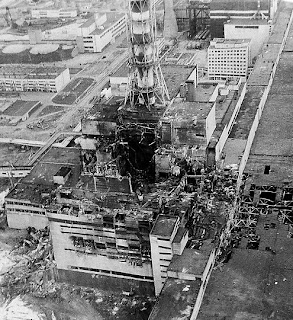 For 50 years dangerous concentrations of radionuclides have been accumulating in earth, air and water from weapons testing and reactor incidents. Yet serious studies of the effects of radiation on health have been obscured – not least by the World Health Organisation.

In June 2007 Gregory Hartl, World Health Organisation (WHO) spokesman for Sustainable Development and Healthy Environments, claimed that the proceedings of the international conference held in Geneva in 1995 on the health consequences of the Chernobyl disaster had been duly published (1). This was not so. And the proceedings of the Kiev conference in 2001 have never been published either. Challenged by journalists a few months later, the WHO repeated the claim, providing references to a collection of abstracts for the Kiev conference and just 12 articles (out of hundreds) submitted to the Geneva conference.

Since 26 April 2007 (the 21st anniversary of Chernobyl), a large placard has informed WHO employees each day that one million children in the area around Chernobyl are irradiated and ill. IndependentWHO, the group organising the action, accuses the WHO of a cover-up of the health consequences of the catastrophe, and of failing to assist populations in danger.

The WHO, they insist, must end the agreement made in 1959 which binds it to the International Atomic Energy Agency (IAEA) (2) and prevents it from initiating a programme or activity in the area of nuclear power without consulting the IAEA “with a view to adjusting the matter by mutual agreement” (Article 1, Point 2).

Independence from the IAEA would permit the WHO to conduct a serious, scientific evaluation of the disaster and provide appropriate health care to contaminated people. A resolution to this effect is in preparation for the World Health Assembly in May 2008 (3) and an Appeal by Health Professionals has been launched (4).
Industrial and military lobby

According to its statutes, the IAEA (a UN agency which reports to the Security Council) is mandated to “to accelerate and enlarge the contribution of atomic energy to peace, health and prosperity throughout the world”. It is in fact a lobby, industrial and military, which should have no role to play in public health policymaking or research.

The IAEA has vetoed conferences planned by WHO on radioactivity and health and, in turn, the WHO has endorsed the nuclear lobby’s grotesque statistics on mortality and morbidity relating to the Chernobyl accident – 56 dead and 4,000 thyroid cancers (5). Denial of disease inevitably implies denial of health care. Nine million people live in areas with very high levels of radioactivity; for 21 years now these populations have had no choice but to consume contaminated food, with devastating effects on their health (6).

For the nuclear lobby, any research indicating harm from ionising radiation represents a commercial threat that must at all costs be averted. Research on damage to the human genome (one of the most serious consequences of the contamination) was not part of the international project requested of the WHO in 1991 by the health ministers of Ukraine, Belarus and the Russian Federation. Yet dental caries was made a research priority. And although these countries had addressed their research request to the WHO, it was the IAEA which planned the project.

This conflict of interest has already been fatal for hundreds of thousands of people according to studies by independent scientists and institutions (7). And the greatest burden of disease and death is yet to come – given long latency periods, the increasing concentration of radionuclides in internal organs from food grown in contaminated soil, and damage to the human genome over many generations.

Hundreds of epidemiological studies in Ukraine, Belarus and the Russian Federation have established that there has been a significant rise in all types of cancer causing thousands of deaths, an increase in infant and perinatal mortality, a large number of spontaneous abortions, a growing number of deformities and genetic anomalies, disturbance and retardation of mental development, neuropsychological illness, blindness, and diseases of the respiratory, cardiovascular, gastrointestinal, urogenital and endocrine systems (8).

But who will believe them? Four months after the meltdown Morris Rosen, the IAEA’s director of nuclear safety, said: “Even if there were an accident of this type every year, I would still regard nuclear power as a valuable source of energy” (9). Public information on the real health consequences of Chernobyl could seriously change the debate about nuclear options. And that is why the WHO is afraid of the children of Chernobyl.
Stronger than the tobacco lobby

For decades the tobacco, agrochemical and petrochemical lobbies have obstructed implementation of public health and environmental measures that might interfere with their profits. But the nuclear lobby is incomparably more powerful than any of these as it comprises governments of nuclear states, most significantly, the United States, the United Kingdom and France, and powerful intergovernmental organisations. The disinformation emanating from industrial and military lobbies is overwhelming – and dangerously, it carries state authority.

Furthermore, the corruption of science also concerns our most prestigious academic institutions which, as an editorial in The Lancet reported, “have become businesses in their own right, seeking to commercialise for themselves research discoveries rather than preserve their independent scholarly status” (10). Peer-reviewed studies, cited as evidence of the safety of nuclear activities, all too often emanate from, or are financed by, the nuclear lobby.

Corporate science, through denial, cover-ups and lies, has brought us to the brink of self-destruction in relation to global warming. So how can we contemplate trusting corporate science in relation to nuclear power? While the emissions responsible for climate change are amenable to control (in theory), nuclear technology and its waste products are not, and its consequences, even if nuclear activities ceased tomorrow, will affect life on earth for millennia.

The “science” that has informed the nuclear debate in general, and the Chernobyl catastrophe in particular, is corporate science in which the industry is judge and jury in relation to the health consequences of its own activities. The entire edifice of nuclear institutions, governmental, regulatory, military, industrial, scientific, research and intergovernmental, including Euratom and some UN agencies, is one incestuous happy family (11).
Pseudo science

The flaws in this pseudo science range from the flagrant and preposterous to the subtle and dishonest, as shown by expert Chris Busby, journalist Wladimir Tchertkoff, as well as the Permanent People’s Tribunal (12).

The first category includes falsification and suppression of data; failure to measure exposure, screen for cancer and investigate the relationship between the two; attacks on independent researchers and their institutions; censorship of studies revealing adverse effects, discounting thousands of untranslated studies from the three most affected countries; and exclusion from conference agendas of entire scientific domains (such as the health effects of chronic, low dose, internal radiation, accounting for almost all the contamination in populations around Chernobyl).

The second category involves dozens of manipulations of data, among them: averaging exposures over entire populations and ignoring local sources of concentrated contamination; ending studies after 10 years thereby excluding long term morbidity and mortality; qualifying five year survival as “cure”, only considering cancer, those still alive and the three most affected countries; claiming decreases in childhood cancers when in fact children have become adults with cancer and therefore no longer appear in that database.

According to the National Cancer Institute, cancer incidence (all sites) in the US increased by 55% between 1950 and 1995; the trends in Europe and other industrialised nations are similar. Non-smoking related cancers are responsible for about 75% of the overall increased incidence of cancer since 1950, and cannot be explained in terms of better detection or ageing (13). Cancer incidence increases in parallel with gross national product and industrialisation but the obvious explanation for this phenomenon – environmental pollution, chemical and radioactive – is ignored. Perversely, victims are blamed for their lifestyles.
Complicity of academe

The cancer epidemic is already affecting more privileged and articulate sectors of society who are demanding serious scientific explanations and real primary prevention, which means addressing root causes – chemical and radioactive pollution – not screening for early detection of disease, which is secondary prevention. Patients’ associations are calling for a boycott of the powerful cancer charities, closely linked with the billion dollar medical equipment and pharmaceutical industries, and cancer victims are attempting to bring those responsible for the cover-up to justice (14).

The commercialisation of science and the close relationship between industry and academic institutions should be at the centre of the WHO’s concerns. Upon election as director-general, Margaret Chan cited technical authority as one of the WHO’s unique assets. “We can be absolutely authoritative in our guidance,” she said. In the area or radiation and health, it would be more accurate to say that the IAEA (which has no competence in public health) can be absolutely authoritative in the WHO’s guidance.

Can we count on the WHO’s member states to take action? The Lancet editorial noted: “Governments, nationally and regionally, have consistently failed to put their people before profit” (15). We need serious, independent research on the health consequences of civil and military nuclear activities, and the results disseminated without hindrance.