Make the Bra a "No Phone" Zone 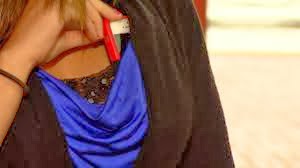 The Environmental Health Trust would like to hear from physicians and patients with similar cases of multifocal breast cancer tied with cell phone use and are encouraged to email EHT at info@ehtrust.org. For more information, visit http://www.ehtrust.org.

Teton Village, WY -- (SBWIRE) -- 09/23/2013 -- For many young women today, tucking cellphones in the bra has become a cool, hip way to have easy access to these electronic devices. Women can jog, drive, shop or sit in darkened movie theaters, quickly responding to tingly vibrations at their breast. Most women have no idea that cellphones are two-way microwave radios that should not be kept directly on the body warns Environmental Health Trust (EHT), a group promoting safer phone use especially for non-adult users and for pregnant users.

“As we broach the October reminder of breast cancer awareness, the media are packed with warnings about the disease. What’s missing from this welcomed public attention is the fact that the ways some people are using their phones today increases their risk of developing breast cancer and other diseases. A cellphone’s sporadic microwave radiation seeps directly into soft fatty tissue of the breast. That’s not a good thing,” warns EHT’s founder Dr. Devra Davis, cancer epidemiologist and veteran breast cancer researcher.

Adding credence to the group’s concerns regarding a link between cellphones and multifocal breast cancer is a new report in Case Reports in Medicine, highlighting four young women—ages from 21 to 39—with multifocal invasive breast cancer. This scientific paper raises concern of a possible association with nonionizing radiation of electromagnetic field emissions from cellphones. The research team, which included Dr. Lisa Bailey who is a former president of the American Cancer Society California and one of California's top breast surgeons, Dr. Robert Nagourney of Rational Therapeutics one of California's top oncologists and Dr. John West from Breastlink, uncovered a common theme from each of the four patients studied.

The team found all these patients regularly carried their smartphones directly against their breasts in their brassieres for up to 10 hours per day, for several years, and developed tumors in areas of their breasts underlying where the phones were carried. All patients had no family history of breast cancer, tested negative for BRCA1 and BRCA2, and had no other known breast cancer risks. Their breast imaging revealed clustering of multiple tumor foci in the breast directly under the area where the phone touched the body. The conclusion of the paper was that these cases raise awareness to the lack of safety data regarding prolonged direct contact with cellphones.

Tiffany Frantz, one of the young patients in the case study, told KTVU-TV that she had no idea there was any risk involved. "I put my cellphone right in my bra," said Frantz in the TV report that recently won an Emmy. However, her mother Traci Frantz immediately made the connection right after Tiffany developed breast cancer at age 21. "We never took it seriously until after she was diagnosed." Her tumors were exactly where her cellphone had been kept in her bra for about six years. No one ever told us that this was a very bad idea." said Traci Frantz. Their family has no genetic or other risk factors. Surgeons ended up removing Tiffany's left breast.

According to surgeon and co-author of the report, Dr. Lisa Bailey, young women should never store their phones in their bras. “Until more data becomes available, efforts should be made to encourage cellular phone users to follow the recommendations of mobile device manufacturers and to avoid skin contact. Further research is urgently needed in this area. In our practice, we have started to incorporate frequency of cellular phone use and placement location into part of our routine patient-history documentation. Physicians should document this behavior and also inform their patients that, until sufficient safety data becomes available, prolonged skin contact with cellular devices should be avoided.”

“Our group works closely with physicians like Drs. Bailey, Nagourney and West and others, to report additional cases of breast cancer that resulted from holding cellphones in their brasseries. That Experimental studies show that cellphone radiation accelerates the growth of breast cancer cells and alters that of normal cells. It’s time to get a headset, use a speakerphone and take those phones out of your pockets and bras. “Far better to be safe now than sorry years later,” warns Dr. Davis.

EHT would like to hear from physicians and patients with similar cases of multifocal breast cancer tied with cell phone use and are encouraged to email EHT at info@ehtrust.org. For more information, visithttp://www.ehtrust.org.

Environmental Health Trust (EHT) educates individuals, health professionals and communities about controllable environmental health risks and policy changes needed to reduce those risks. A recipient of the Nobel Peace Prize with Al Gore and his team in 2007, EHT President and Founder, Dr. Devra Davis has authored a number of popular books, including WHEN SMOKE RAN LIKE WATER, a National Book Award Finalist, THE SECRET HISTORY OF THE WAR ON CANCER, and DISCONNECT: The Truth About Cell Phone Radiation, What The Industry Is Doing To Hide It, And How To Protect Your Family, which was awarded the Nautilus silver medal award for investigative reporting. The foundation’s website is the go-to place for clear, science-based information to prevent environmentally based disease and promote health, and will have portals for the general public, children, and health professionals. For more information or to get involved in the numerous special projects spearheaded by EHT, please visit http://www.ehtrust.org and find EHT on Facebook.
http://www.sbwire.com/press-releases/breast-cancer/cellphones/sbwire-336258.htm
Publié par Meris à l'adresse 9:20 AM