The Pandora's Box of the Nuclear Industry 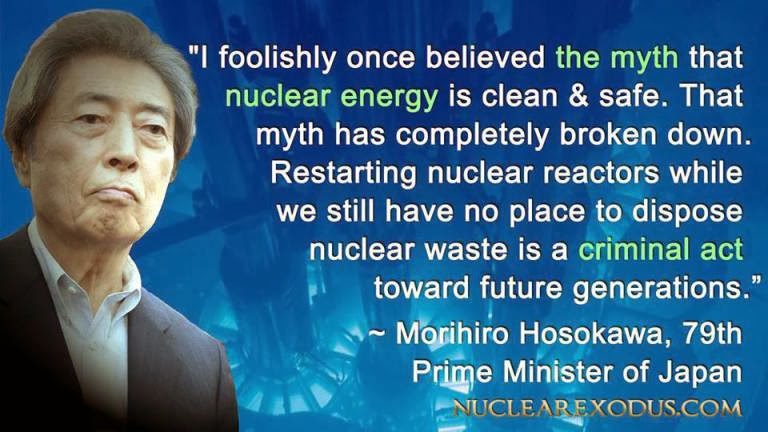 The Pandora’s Box of the Nuclear Industry
by Ethan Indigo Smith, Contributing Writer for
Wake Up World,

As a preliminary to my discussion of the latest pro-nuclear sewage spill, “Pandora’s Promise”, we have to get down to the basics – in part because pro-nukers prefer to make things hyper-biased and convoluted with complexity, factual omission and total bovine scat.

Remember, not all Bequerels are created equal. We learn in middle school you can’t compare apples to oranges, and yet pro-nuclear “scientists” continue to compare bananas to cesium, plutonium and uranium. The decay rate of radioactive potassium in bananas is absolutely harmless and will not cause death by a thousand cuts like the hyper-excited elements in industrial nuclear experimentation. You can’t compare bananas to a triple meltout, including one MOX fueled reactor among them!

This twisted view led to a particularly laughable illustration in the recently screened film Pandora’s Promise where, with CNN cartoon technology, the waste total of nuclear experimentation is shown to be so small that it could all be stored in one football stadium. This is a great way to relate this information, on one level, as most people can comprehend the size of a football stadium, but otherwise it is complete rubbish, based on the omission of critical information. And this was the common theme throughout.

For one, the United States has accumulated over 70,000 metric tons of spent nuclear fuel, and continues to accumulate 2,200 tons per year. Yet it has no place to permanently store the permanently toxic material. This is a massive environmental issue, today and for future generations, and should be presented that way.

Two, if pro-nukers tried to store it all in one place it would ignite and kill all life as we know it on the planet. Nuclear waste can never be contained to a space the size of a football stadium. Drawing this comparison is deceptive as it leads the public to believe that the waste generated by the nuclear industry can be isolated to one place.

Three, this comparison does not show the destruction caused by its extraction, refinement, water usage and normal releases when used as fuel.

Four, in perspective, just a handful of the stuff could kill masses of people in multiple ways. Those with environmental exposure suffer high rates of cysts and other health problems, and those most exposed suffer what is known as ‘death by a thousand cuts’, the nuclear industry’s term for being sliced up by radioactive particles (or the quaintly nicknamed ‘fuel fleas’) which cut through human bodies and fry their organs into hydrogen peroxide.

Where is the Wisdom?

This leads to my main problem with the nuclear industry and its supporters. Pro-nukers have amassed a vast amount of knowledge in nuclear technology, but no wisdom. They know how to do many things, but can’t contain their disastrous consequences and lack the integrity to pursue other safe and sustainable – but less profitable – sources of energy. And by sustainable I mean sustainable for generations, not just for today, or tomorrow. But instead the nuclear industry continues to endanger the balance of life on earth, creating a problem for generations, not just for today, or tomorrow.

The film Pandora’s Promise, by director Robert Stone, casts nuclear energy as the logical and safe alternative to petroleum sourced energy, as though nuclear energy systems are good for individuals and the environment, as if nuclear fuel does not endanger everybody and everything. The fact is, nothing is more severely dangerous to us all – both biologically and politically – than nuclear experimentation. Nothing causes as much overt entropy, no other system is a more perilous (and unnecessary) undertaking.

Even if the machines worked efficiently and safely, and did not leak cancer-causing radioactivity, we are still saddling our children and their children (and their children…. ) with waste that needs to not only be cared for but cooled and stored and then restored, just to make certain it does not destroy whole regions in some nightmarish fuel-pool abandonment domino effect. But the fact is, none of these machines have ever operated according to plan, a plan that involves thousands of years of care, and which we are only a couple years into.

It seems that pro-nukers have conveniently forgotten.

In some ways, nuclear energy systems are no different to petrolium-based energy systems. Both require complex mining and extraction, complex refinement and processing, which destroy whole areas and communities before even being implemented. Both require complex delivery systems which are made solely to benefit “the few” at the top of the institutional pile, via monetary profit. Nuclear is no alternative to petrol; it is mined, refined and distributed, with profits benefiting oligarchical business interests with militaristic ties. The main difference – aside from the fact that our governments start wars over oil resources - is that a nuclear meltdown is vastly more destructive than a refinery fire or oil spill.

Nuclear experimentation is a literal manifestation of Pandora’s Box.

No matter how much knowledge pro-nukers steer with, they have proven through their ongoing and catastrophic failures that they lack the wisdom to tame their deadly creation. This is clearly illustrated by the very name of the much-touted pro nuke film ‘Pandora’s Promise’. If pro-nukers had any wisdom among them, they would never have named their film Pandora’s Promise, because anyone with any wisdom at all understands the meaning of the phrase “Pandora’s Box” and the original story of Pandora in Greek mythology; although she was warned not to, Pandora opened the box, releasing numerous evils into the world. When she tried to put the lid back on, she found it was too late – she could not contain what she had unleashed.

The lesson of the allegory is that eternal fires should not be tampered with, that greedy ends should not be sought through greedy and dangerous means. The true promise of Pandora is a lesson in the very arrogant and greedy potential within human nature; the potential to unleash the uncontainable, simply because we can. And yet, we can’t contain it. Despite this, the nuclear industry continues its construction of nuclear plants which all promise, at one time or another, to cause more global poisoning.

By naming their film “Pandora’s Promise”, pro-nukers actually reveal the very nature of the industry’s insistent Pandora-like behavior. Perhaps the film’s director subconsciously slipped a warning into the title….

This article is dedicated with respect to:

· Sister Megan Rice, the 84 year old nun and anti-nuclear activist, and her two companions, who broke into the Oak Ridge nuclear reservation in Tennessee, splashed ‘blood’ around the facility, and sat around singing until someone finally came to arrest them. Sister Rice is expected to be sentenced on 18th February 2014. Her only regret? That she didn’t do it 70 years ago.

· Masao Yoshida, the former engineer at Fukushima, who died of rapid onset oesophageal cancer (and who probably had multiple cancers) after risking his life to stabilise the crippled Fukushima Daiichi reactors in March 2011.

· The Fukushima 50, the faceless Fukushima Daiichi employees (numbering in the hundreds) who were exposed to radiation in the 2011 disaster. Of course we’ll never know the true fate of the Fukushima 50 because of the climate of secrecy in Japan, as depicted in country’s controversial new Secrecy Law.

· The crew of the USS Reagan, who were exposed to a triple-meltdown release of ‘fuel fleas‘, and whom the New York Post reported suffered from “leukemia, testicular cancer and unremitting gynecological bleeding requiring transfusions and other intervention” as a result.

· Mother Earth and all the animals killed and harmed by our materialistic greedy industries and operations, and whom are never counted in official “death” tolls.

· The people that the effects of the Fukushima nuclear accident will eventually kill. Reports estimate that “nearly 36 per cent of children in the nuclear disaster-affected Fukushima Prefecture have abnormal thyroid growths… [and] infants face the direst consequences, as their cells divide at a higher rate.”

· All people of the institutionalized world, for we all contain Fukushima fuel fleas in our bodies, forever.

“When the Chernobyl accident happened some of the iodine went around the world several times. In fact, you, I, everyone – we all have a piece of Chernobyl in our body….” ~ renowned theoretical physicist, futurist and author Michio Kaku

About the author:
Ethan Indigo Smith is the newest member of Wake Up World’s team of Contributing Writers. Ethan was born on a farm in Maine and lived in Manhattan for a number of years before migrating west to Mendocino, California.

The events of September 11, 2001 inspired him to write his first book, The Complete Patriot’s Guide to Oligarchical Collectivism, an insightful exploration of history, philosophy and contemporary politics.

· The Matrix of Four, The Philosophy of the Duality of Polarity on the subject of the development of individual consciousness

· the controversial The Terraist Letters, a work that humorously contrasts the very serious issues of global nuclear experimentation promotion and global marijuana prohibition

· Tibetan Fusion a book of simple meditative practices and movements that can help you access and balance your energy, and

· The Little Green Book of Revolution an inspirational book based on ideas of peaceful revolution, historical activism and caring for the Earth like Native Americans.

Visit Ethan on Facebook and check out Ethan’s author page on Amazon.com