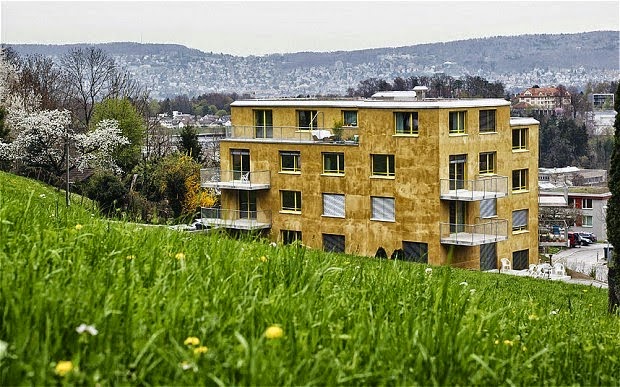 We do not wish to discourage the initiator of this project, but it seems that the site is badly polluted with cell phone tower radiation.  The article, however, describes well the plight of people living with chemical and electromagnetic sensitivities.

In Zurich, the first European refuge for electrosensitive people
by Solène Cordier, Le Monde, 12 August 2014 (translated by the Editor of this blog)

At first glance, nothing distinguishes this apartment building in the suburbs of Zurich from those surrounding it. Located on the heights of the quiet neighborhood of Leimbach, its sand-colored walls are surrounded by a vast garden of tall grasses. The big trees of the forest of Entlisberg, perched on the adjacent mountain, extend their refreshing shade to the surrounding area.

It is because of the particular setting that the building, destined to welcome people suffering from multiple chemical hypersensitivity (MCS) and electrosensitivity, has been constructed in this location. “Five sites were studied in the beginning,” says Christian Schifferle, the initiator of the project. “Measurements showed that this site was radiated very little thanks to the nearby mountain which offers a protective environment.” The absence of antennas was also a precondition for construction, as well as air quality.

At age 59, he says he has been hyper-allergic and electrosensitive since childhood. His suffering has constrained him to live for long periods alone in the forest in a caravan with walls covered in aluminum foil. At that time, all odors assaulted him: perfumes, cleaning products, paints, cigarette smoke… At age 35, he discovered in the press that other people suffered the same symptoms which, when they reached a critical level, constrained these sick people to interrupt all professional and social life. With only his disability pension, Christian decided to fight for recognition of his pathology.

« Today, this building symbolizes our emergence from invisibility, » he says with emotion, « even if in Switzerland as in France, MCS and electrohypersensitivity are not recognized officially as diseases.

A total cost of 4.9 million euros

Completed in December 2013, this first anti-allergic apartment building in Europe cost 6 million Swiss francs (4.9 million euros), the materials and technologies used raising the cost around 25% compared to the usual apartment building in Zurich. The cooperative presided over by Christian Schifferle has benefited from the support of the city which furnished the land of 1,200 square meters and financial aid.

When one goes inside the building, some details betray its specificity. The walls of the common areas painted with lime, the ceilings of raw concrete, and the floor in stone leave an impression of being unfinished. The natural materials were given preference by the architects, who received the support of a chemist during construction. “It is the plaster used for the walls which posed the most difficulty. It was necessary to reduce the additives in order that for it to be tolerated by the residents,” explains the architect, Andreas Zimmermann.

In order to provide protection from electromagnetic waves, fiberglass was used in place of the usual metallic frame. At the entrance of each apartment, a sealed-off area has been foreseen to remove clothes that have too much of an odor and each room is equipped with a system of air purification. In the basement, next to the communal washing machine, there are authorized detergents and cleaning products, all labeled, “odorless” and “without dyes”.

The day before our arrival, Mr. Schifferle explained the rules: no cell phone, no smoking, no perfume is tolerated inside the building. “I have two smartphones but they are nearly all the time in “airplane” mode. I use them to take photos, one of my passions,” says Christian. For communication related to his activity as president of the cooperative and of a foundation for recognition of MCS and electrosensitivity, he uses a corded telephone and a computer connected by cable to the Internet.

Moreover, a special shielding covers all the electric cables in the building which has a minimum number of outlets. Differing from other electrosensitive people, the intolerance of the residents to waves concerns only high frequencies (mobile phones and Wi-Fi).

For Christian as well as his 13 neighbors, this place serves as a refuge. Conceived as a Faraday cage, it allows each person to recharge his/her batteries and hope to again return to normal activities.

Marc (his first name has been changed) is 32 years old. Originally from Fribourg, he moved here in April. Like Christian, he receives a disability pension for reasons other than electrosensitivity and MCS. However, after several experiments, he arrived at the conclusion that his exhausted state was very likely due to exposure to waves and chemical products. “They diagnosed me with anxiety disorder, but I believe that this is not the cause but a consequence of my fragility,” he explains.

The victim of severe digestive disorders, chronic exhaustion and food allergies since childhood, Marc had to abandon his studies at age 22. He has never succeeded in holding down a job for more than several months. A year ago, he discovered that his condition substantially improved when he was not in contact with waves. “I slept on many occasions in the cellar of my parents, then I went to live for some time at a farm in the Jura,” he confided, before learning through his brother of the existence of an apartment building project in Leimbach and submitting his application.

Since settling in, he has the impression that his state of health has slightly improved. To his great surprise, in arriving in Leimbach, he met several persons his age. His neighbors include a 28-year-old woman who has been living there since the beginning of the year with her companion who does not suffer from any pathology.

With the exception of the latter person, in order to obtain an apartment, all the residents of the building have had to justify their symptoms by presenting a medical certificate. Certain social criteria are also required to benefit from an apartment whose monthly rent is between 1,300 and 1,600 Swiss francs (1,000 and 1,400 euros), in great part borne by the city of Zurich.

The city of Zurich is awaiting the results of an evaluation conducted by the University of Bern of the inhabitants of this pilot project for an eventual repetition of the experiment. Christian Schifferle has already looked at land in the Ticino and in France on the Côte d’Azur. “For people like us, it would be wonderful to imagine being able to go on vacation”, he says, smiling.