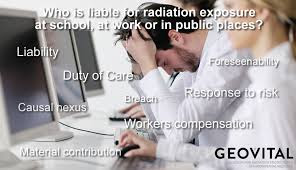 Risks, regulations and liability around exposing other people to wireless technology EMF radiation – A review of the UNSW Sydney ‘faculty of law’ program – part 2

The world is changing at a rapid pace. Not surprisingly then, there has been a rampant proliferation of home and business cordless transmission technology (e.g. mobile phone towers, smart meters, wi-fi cordless phones) that has vastly increased our exposure to radiation. Recent legal developments are causing the producers of this radiation overload to sit up and take notice, as the issue of costly liability and lawsuits is fast becoming a reality.


The law: When is an employer or school liable for the health effects imposed on others from their wireless technology?

After the undeniable facts presented by the medical experts (part 1), Jenne Tzavaras, partner at HWL Ebsworth Lawyers, took the audience through liability considerations. Stressing that a clear distinction must be drawn between Common Law negligence claims and statutory Workers Compensation claims. The important distinguishing feature here is the required causal nexus.

To be able to seek liability under workers compensation, it must be determined if the worker compensation can apply to the situation.

1. The claimant must be a worker.
2. The worker must have suffered an injury arising out of or in the course of employment.
3. Finally, the worker’s employment must be the main contributing factor to the injury.

A number of past court cases were brought up to show that in this context injury can be interpreted as physical injury, disease or mental illness. In the case of Commissioner for Railway v Bain [1965] 112 CLR 246 Windeyer J, carpel tunnel syndrome was viewed as ‘no less of a disease than is an abnormal physical condition caused by a germ or by the repeated absorption through the nose or skin of some deleterious substances‘. Effectively the inability of the body to cope with the repetitious stress imposed on it was seen as disease. This seems to fit very well with the situation where people are experiencing health concerns, like headaches, from imposed exposure to EMF.

When science tells us there is no connection between the events, like the death of an employee and their work, then the judge can’t manufacture a connection. However, if there is controversy between the science and the medical opinion, then the courts can look at all the evidence and decide whether it was probable. And so this will be different in every case where this situation exists because the evidence presented will be different in each case.

Mr McDonalds was working at the Commonwealth Scientific and Industrial Research Organisation (CSIRO) since 1994. He claimed compensation under the Safety, Rehabilitation and Compensation Act 1988 (Cth) as he claimed to have been injured in the course of his employment. Conditions he had had been contributed to, in a significant degree, by his employment.

The claims were made for:

- Aggravation of an electromagnetic hypersensitivity syndrome
- Chronic Adjustment disorder with depressed moods
- Permanent impairment which came from the adjustment disorder, and
- Migraines

Comcare refused each of his claims.

Jenne Tzavaras covered many details of the case but the main and most important factors in it seemed to be that:

- Mr McDonald advised the selection panel that decided to hire him, that he suffered from sensitivity to electromagnetic frequencies, also reffered to as EMF.
- Mr McDonald had be diagnosed for this EMF sensitivity condition in 1993.
- Mr McDonald had taken steps himself reduce exposure to EMF, including moving to the country and reducing his exposure to electronic devices.
- Mr McDonald was granted assistance by the CSIRO during his worktime which assisted him in not having to be exposed to EMF that much, as working on computers etc. was something he was sensitive to.
- After a move from the Hobart office to the Melbourne office, his administrative support was withdrawn in 2006, forcing him to make more use of computers.
- The 2 weeks after this he experienced nausea, fatigue and poor concentration.
- He consulted his doctor who wrote the CSIRO recommending that the administrative support be made available again to reduce Mr McDonalds exposure to EMF.
- In 2006, CSIRO required Mr McDonald to be subjected to a number of trials in using electronic devices at work. His symptoms again became worse after each trial.
- In 2007 his administrative support was once again withdrawn by CSIRO and he even got his wife assist him, who did his computer work for 3 months.
- During this time more trials were requested by CSIRO and his symptoms were worse again. He suffered:
-- increased dizziness
-- disorientation
-- nausea that lasted longer
-- eczema
-- tinnitus, and
-- pain in the left side of the skull before the onset of migraines.
- He was then permitted to work from home for 6 months, but this was not successful and he tried to return to work but he became too ill to continue, upon which he took sick leave. He was last at work in 2009.
- In May 2011 the CSIRO informed Mr McDonald that he was medically unfit to perform the requirements of his employment.

A number of medical experts were involved in the court case:

Dr Cooper who stated that EMF sensitivity had been well documented in medical literature for a number of hears. That the WHO has recognised the Electromagnetic Hypersensitivity condition as involving “nervous system symptoms like headache, fatigue, stress, sleep disturbances, skin symptoms, prickling burning sensations and rashes, pain and ache in muscles and many other health problems.”. Dr Cooper also stated under cross examination, that there are no acceptable standards for diagnosis of a sensitivity to EMF and that research in the subject is still in its early stages.

Dr Hoching, who has 30 years experience and expertise in the health effects of EMF, has assessed Mr McDonald’s workplace. He stated that sensitivity to EMF can happen when exposed to any part of the electromagnetic spectrum.

Dr Andersen (Engineer and Biophysicist) was of the opinion that Mr McDonald does not exhibit an actual sensitivity to EMF but instead he contributed the symptoms claimed to be caused by EMF to a nocebo response with he deemed more plausible. This means that the symptoms were a conditioned response to the expectation of being exposed to EMF. He explained how the radiation levels of the sources Mr McDonald had problems with, were within the extremely low frequency and radio frequency (RF) bands of the electromagnetic spectrum. He also commented that the EMF radiation experienced in commercial and light aircraft could be expected to be much higher in comparison to a normal office environment.

Decision in McDonald and Comcare

The court decided in the favor of Mr McDonald and made comments along these lines:

- Mr McDonald has suffered from an ailment even though it is not recognised with a diagnostic label,
- the trials he was exposed to at work in 2006 and 2007 made his symptoms worse than they had been before the trials.
- That CSIRO had aggrivated the condition with the trials and the aggravation is ongoing.
- They were satisfied that the exposure to EMF was a result of his employment, and that
- the aggravation of the ailment was, to a significant degree, contributed to by him working at CSIRO, and that
- there was no evidence that pointed to any other factor than his exposure at work.
- They accepted that Mr McDonald had suffered an injury, being chronic adjustment disorder with depressed mood, as a result of his working with CSIRO, and that this was a permanent impairment one, and that
- Mr McDonald suffered an injury in respect to migraines.

Reflecting on the McDonald’s case

In the author’s perspective, the case with Mr McDonald was full of transparency with the employer. He raised the issue before they hired him. CSIRO made provisions to cater for his inability to work with computers etc. CSIRO took it upon itself to conduct tests and it was these tests that, so it feels when listening to the lawyer summarise, is what lost the case for CSIRO.

Of course, a lot has happened since this court case. Other legal battles have been won and more evidence that RF-EMR (including Wi-Fi) is harmful keeps surfacing.