Cell Phones and Breast Cancer - Bras: The No Phone Zone 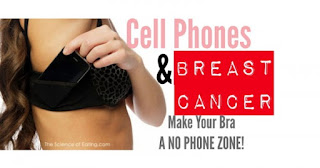 The talk about cell phones and cancer connection has been discussed for years now, but most still wonder if there's a real association and concern. One possibility does appear to exist, at least among certain women, and it all depends on where they carry their cell phone.

Thousands, of not millions of women - especially young ones, choose to keep their cell phones in their bra. This seems like the most convenient solution, because it allows women to ditch their purse and become hands-free.

Causing more need for storage is the fact that many womens' clothes come without pockets, so if you don't have a purse, the bra is an obvious choice. Also in noisy environments, it's harder to hear cell phone ring tones, so women like placing their cell phones on vibrate mode and placing it in their bras to continue receiving calls.

A recent survey reveals 40% of college females put their cell phone in their bra at least some time during the day, and 3% report doing it for more than 10 hours a day. However, Dr. John West, a Los Angeles breast surgeon, said women need to stop this practice stating, "We must make the bra a no phone zone," he said.

West believes storing the cell phone next to the breast for extended time periods can cause breast cancer. But since cell phone technology is fairly new, evidence from critical long-term studies simply isn't available yet. We don't know what will happen over the next 20 or 30 years, and if a sufficient number of cases will surface to prove beyond a shadow of a doubt that the cell phones are causing the cancer. When you take something emitting high energy microwave radiation, and put it directly on the skin for prolonged periods of time in young women with vulnerable, developing breasts, we may have a perfect storm.

One clear signal is that Dr. West is seeing more breast cancer in young women than he's ever seen in his 40 years of practice. Although the average age at diagnosis of breast cancer is over 60 years, about 13,000 women younger than 40 years are diagnosed with breast cancer each year in the US.

Doctors diagnosed Donna Jaynes with breast cancer at 38 years old. Jaynes questioned how she got her cancer because she had no risk factors. However her answer was on her X-ray. She said the tumors were in the exact spot where she used to tuck her cell phone and were even shaped like the phone. Jaynes said she stored her cell phone in her bra every day for about 10 years.

"I used to wear it over the left side, and I would just tuck it in my bra whenever I would go for hikes or walks with my girlfriends,"

This went on for around five years.

I just happened to be putting on a shirt and I noticed the lump and I thought, 'That's a little odd, I don't remember that being there,'"

Stunned by her X-ray, Depalma came to what she called an obvious conclusion. The area where the cancer was found, just happened to be the same size as her Blackberry phone.

Watch the video below for 23 year old Tiffany Franz's breast cancer story, and it's connection to where she kept her cell phone.
[See original article.]

Despite stories like these, women carrying cell phones in their bras is becoming even more widespread. And now there are bras with pockets for cell phones on the market. Dr. June Chen, a Los Angeles radiologist, grew suspicious when she found she was diagnosing more and more of her young patients with cancer.

Dr. Chen advises all women to keep their cell phones away from their bodies until studies conclude whether close proximity causes cancer.

"I think it's too early to make that statement," she admitted. "However, I think there may be an association. And therefore, since we're not sure, let's be cautious."
The No Phone Zone

Most cell phone companies acknowledge some risk, even Apple advises keeping the iPhone more than a half-inch from the body. But these safety guidelines are often overlooked because they are in the back of the manual on page 99 in small print. We need to get this information to the surface.

So according to some breast cancer survivors and the doctors who treat them, women should declare the bra a "no phone zone" before it's too late.