This article begins to make the case that information carrying microwave radiation (ICMR) from wireless systems, 5G included, is one of the most devastating environmental and health threats ever created. 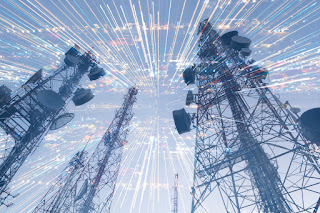 (Photo):  Wireless telecommunications, As with so many technological conveniences we all depend on, started out as a military project. Though an important distinction to be made is that wireless technologies were initially designed as a weapon.

While the preponderance of danger warnings concern human health and well being, the greater threat by orders of magnitude is to the environment.

A public and scientific wave of resistance may be building against 5G, but much of it is out of critical context and consequently ill-advised. The obvious context, of course, is wireless technology in general, the ultimate context of which includes the very nature of being. Life is affected by artificial electromagnetic fields (EMFs) because electromagnetism is the foundation of life.

The origin, history and nature of 1G through 4G reveal egregious Industry and Government (IG) deceit underpinned by scientific fraud. Foreknowledge of the dire consequences, beginning about two decades before market rollout, was concealed.

Virtually all governments and regulatory organizations – Federal Communications Commission, World Health Organization, and the reputed independent International Council on Non-Ionizing Radiation Protection, among others – perpetuate a blatant scientific fraud: The arbitrary assumption and single-minded assertion as an operating principle that the only potential danger from ICMR is thermal (tissue heating).

In fact, voluminous scientific literature beginning in the 1950’s showing harm from non-thermal power levels was ignored or dismissed, making the tobacco deception a mere pimple on the face of such evil.

This is no accident, but a tried and true tactic. “Only the small secrets need to be protected. The big ones are kept secret by public disbelief,” Marshall McLuhan said.

The Bio-lnitiative Report: A Rationale for a Biologically-Based Public Exposure Standard for Electromagnetic Radiation (BR), has plumbed the history. It reviews, collates and summarizes 3,800 peer-reviewed studies showing harm from non-thermal radiation. It was first published in 2007. The 2012 edition includes 2007 material and covers 1800 subsequent studies.

From a presentation at the Toronto Whole Life Expo 2009 by Andrew Michrowski, PhD: “... Precise, quality, straightforward medical and scientific research since the 1950s details radiofrequency and microwave effects – without influence of stocks, PR and lawyers. By the 1970s, electromagnetic, electrochemical cascade effect equations were well defined for tissues, cells, intracellular and extracellular fluids and macromolecular effects on living systems…

“Analysis of 1950-1974 mortality of 40,000 Korean War veterans shows that microwave exposure effect is cumulative; it affects all deaths …”

This means that even ‘weak’ and short exposures from wireless systems accumulate over the years and decades to engender serious diseases.

Michrowski notes that the National Research Council of Canada Control Systems Laboratory in 1973 showed 22 non-thermal effects documented and generally understood by the scientific community more than 40 years ago.

Michrowski: “Now, scientists daring to describe a part of such phenomena risk their career and income,” which means most won’t tell the truth.

Researching since the 1980’s, one uncompromising scientist with an outstanding career in neuroscience—Professor Olle Johansson—lost his financing in 2017, callously forced into early retirement by Karolinksa Institute (medical college) in Stockholm.

Johansson is telling the truth: The only safe dose of ICMR, based on power level, is virtual zero, or the cosmic background level.

THERE IS NO SAFE RADIATION LEVEL

A 2013 study shows that the Specific Absorption Rate (SAR) is not only insufficient for determining exposure level during typical use, but is dangerously inadequate for biological systems.

Effects can occur any time during or post exposure, nominally speaking, since there is normally no escape from tower radiation. Effects, even if not immediately felt, will cause overt and serious illness in the longer term. The noted phenomenon of cumulative effects is paramount.

Fetuses and the very young are most susceptible. But the young up to 20 years or so are still more susceptible than physically mature individuals.

Corroborating Michrowski, physicist and former Royal Navy diver and trained microwave expert Barrie Trower, PhD, says dangers were fully known by mid-1970’s: The technology was not originally developed for telecom, but, among other things, as a military stealth weapon for inducing illness.

A good introduction to Trower is a 35-minute edit of a long 2012 video interview by the International Center Against the Abuse of Covert Technologies. The technology was adapted virtually unchanged to telecom, although one main difference is that weapons emit much less power.

The point: Exposure standards are based on power levels, but below heating, power is virtually irrelevant: Data modulated carrier frequencies create signal pulses to which cell membranes are extremely sensitive at all power levels. All cells being susceptible, the range of potential effects is extensive.

Pulsing is the reason for the specific term, ICMR.

The aforementioned Bio-Initiative Report found that one tenth of one millionth of a watt per square centimeter, far below the FCC standard, showed harmful effects. One realizes the extreme sensitivity of biological systems. Pulsing is the culprit.

The BR is cited only to reveal independent science the IG (FCC) says doesn’t exist or is “inconclusive:” The call for “…a biologically-based public exposure standard"...deemed safe (for humans) is futile, as is the International EMF Scientist Appeal to the WHO and UN. TJ

When one adds it all up, it becomes apparent that the planet and its people are in perilous trouble at the hands of a government/industry cover-up of the hard facts.

5G technology ups the criminal/pathological ante significantly. Opposition to 5G should be re-focused on the wireless-per-se context, 5G included, to avoid conveying complacency about 4G, which is eminently capable, and in the process, of destroying the environment and human health. And this includes the monumentally stupid and even more dangerous “Smart” stuff, read that WiFi.