Italy: Cell phone and tumors, Turin Court of Appeal confirms: “Link between use and ear cancer. Often scholars are in conflict of interest " 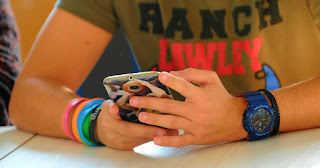 We thank Dr. Joel Moscowitz, School of Public Health, University of California, Berkeley, for this translation of the excellent article on the recent legal decision by the Turin Court of Appeal. He draws our attention to two other versions of the same news story published by The Guardian and Newsweek which demonstrate the pro-industry bias of the mainstream media in the U.S. and U.K. when reporting about cell phone radiation health risks.


The tumor involved in this legal case was a very rare tumor called an acoustic neuroma, also known as vestibular schwannoma. For information about the science see Dr. Moscowitz's post: Acoustic Neuroma and Cell Phone Use.

Cell phone and tumors, Turin Court of Appeal confirms: “Link between use and ear cancer. Often scholars are in conflict of interest "
by Andrea Tundo, il Fatto Quotidiano, Jan 14, 2020 (Google translation from Italian)

The 36 pages represent a historical verdict, because for the first time a worker has obtained two favorable judgments of merit in similar cases: Roberto Romeo, a former Telecom employee, spent at least 4 hours a day on his cell phone.

As happened in the first instance, new consultants reiterated that there is a "etiological link between the prolonged and substantial working exposure to radio frequency emitted by mobile phone and the reported disease."

The tumor in the auditory nerve of the right ear that hit Roberto Romeo was caused by the use
of the phone. The Turin Court of Appeal confirmed the sentence of Judge Luca Fadda,
who in April 2017 had sentenced the Inail to pay the former Telecom technician a
professional sickness pension for the "abnormal" use of the mobile phone,
due to his work, in the period 1995-2010 .

"Scientific literature in conflict of interest"

And in the grounds of the sentence, issued on 3 December, the college also reiterates the suspicions on the impartiality of some 'reassuring' studies: "A good part of the scientific literature that excludes the carcinogenicity of the exposure radio frequency (...) is in a position of conflict of interest, which is not always declared, "write the judges of the Labor Section Rita Mancuso , Caterina Baisi and Silvia Casarino , based on the conclusions of the consultants Carolina Marino and Angelo D'Errico , appointed to reanalyze the evidence already weighed by the ctu of the judge of Ivrea, Maurizio Crosignani .

"Solid elements" on the causal role of use

The 36 pages represent a historical verdict, because for the first time a worker has obtained two favorable judgments in similar cases and the request for compensation by Romeo - defended by lawyers Stefano Bertone, Renato Ambrosio and Chiara Gribaudo of the Ambrosio & Commodo studio - during 2019 it was also accepted by the Court of Monza. The Turin Court of Appeal has no doubts about Romeo's case after having the new experts reanalyze all the scientific material: Marino and D'Errico, the sentence reads, have provided "solid elements for affirming a causal role between the exposure of the person appealed to radio frequencies from a mobile phone and the disease that arose".

"High probability of the etiological link"

According to the judges, in fact, "there is a scientific covering law that supports the assertion of the causal link according to probabilistic criteria 'more likely than not'". And in the "specific case under examination" it is "believed that" with "criterion of high logical probability " it is possible to "admit an etiological link between the prolonged and substantial working exposure to radio frequency emitted by mobile phone and the disease reported" by Romeo all 'Inail.

The "major guarantees" of independent studies

But the consultants and the sentence go further. In fact, on the quality of the scientific literature on the relationship between tumors and radio frequencies, the consultants write: "A large part of the scientific literature that excludes carcinogenicity (...) is in a position of conflict of interest, which is not always declared," they write. In that case, they specify, "it is believed that less weight should be givento studies". A setting that is shared by the Court of Appeal "since it is clear that the investigation, and the conclusions, of independent authors give greater guarantees of reliability than those commissioned , managedor financed at least in part, by subjects interested in the outcome of the studies ".

The story of Roberto Romeo

Romeo, at the time of the events, was a Telecom technician and spent between 2 and 7 hours a day on his cell phone for work: in essence, calculating an average of 4 hours a day, he spent 840 hours per year using the mobile phone for an "estimated total time (...) in the 15-year interval between 1995 and 2010 equal to 12,600 hours" . And at the time, notes the Court, "there were no tools that would allow you to avoid direct contact of the cell phone with your face, such as headphones or earphones". In the following years he then developed a neurinoma in the right ear, the side where the cellphone was used.

The lawyer: "Confirmation on denial studies"

"What interested us most from the legal point of view - explains the lawyer Stefano Bertone - was the confirmation that the 'denial studies' financed by the industry could not go to found, influencing him , the reasoning of court consultants in cases involving mobile telephony ”. The Court of Appeal, adds the lawyer, “gives us reason with a concept as simple as it is decisive: since the industry has an interest in the outcome of studies, those who work for you or with your money express less reliable opinions than those who do research without profit ".

Criticisms also for the Higher Institute of Health

The consultants of the Court of Appeal also criticize the study published last August by the Higher Institute of Health, for which the prolonged use of mobile phones "is not associated" with the increased risk of tumors . In their opinion, the study " inappropriately uses data on the trend of the incidence of brain tumors" and "does not take into account recent experimental studies on animals" nor "has issuedvmore stringent recommendations on the limits of exposure to radio frequencies, in especially for children and teenagers, "although he says he is uncertain about the effects associated with intense use at that age.