On 30 June, Children's Health Defense is holding an information event for the public to explain the OTARD brief to "non-attorneys" and to answer questions. 11:30 a.m. PT/2:30 p.m. ET. Register here. 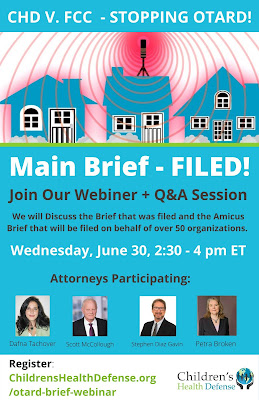 On June 23, CHD filed the opening brief in its case against the FCC’s OTARD Rule Amendment, which allows fixed wireless companies to contract with private property owners to place point-to-point antennas on their property.

On June 23, Children’s Health Defense (CHD) filed the opening brief in its case against the Federal Communications Commission’s (FCC) “Over-the-Air Reception Devices” (OTARD) Rule Amendment, which went into effect March 29. This submission is the main brief for CHD in the case it filed on Feb. 2 in the U.S. Court of Appeals for the DC Circuit.

CHD is opposing the OTARD rule amendment, which allows fixed wireless companies to contract with private property owners, including homeowners, to place point-to-point antennas on their property. The rule also allows wireless companies to add carrier-grade base station antenna installations on private property to extend wireless voice/video/data service, including 5G and Internet-of-Things antennas, to users over a wide area.

The amended rule, which purports to facilitate fast deployment of wireless networks, preempts all state and local zoning laws that would otherwise apply. No application, permit or notice to neighboring properties is required. Homeowners’ association and deed restrictions are also preempted.

“The rule effectively transforms residential areas into radiation-saturated industrialized zones and creates a wireless ‘Wild West,’” explained Dafna Tachover, an attorney and the director of CHD’s 5G and Wireless Harms Project who has been leading CHD’s campaign against the rule amendment.