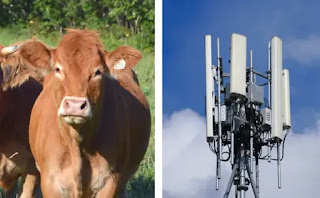 A farmer in central-east France said that milk production had dropped by 15-20% in the days following the antenna installation, and 40 of his 200 cows had died

(Photo): The farmer said that he had noticed a significant drop in milk production within days of the antenna being switched on Pic: Meunierd / KPhrom / Shutterstock

A court in France has found in favour of a farmer who claimed that a 4G antenna was damaging his cows’ health, and has ordered for the antenna to be switched off for two months.

The administrative court in Clermont-Ferrand (Auvergne-Rhône-Alpes) ordered the switch-off after Frédéric Salgues, a farmer in Haute-Loire, said he suspected that it was damaging his herd’s health.

The court said that "it is appropriate to order the temporary cessation of the operation of this antenna for a period of two months, taking into account its general impact, with monitoring, by the judicial expert, of the behaviour of the herd, and of the dairy cows in particular, during this period”.

Operator Orange now has three months to act in accordance with the ruling, including stopping the antenna’s operation while ensuring phone coverage, including emergency calls, for Orange users in the area affected.

After the decision, Mr Salgues told the AFP that he hoped his cows would be able to “recover as soon as possible” and called the case ruling “a major relief and a victory”.

Mr Salgues said that since the antenna’s installation in July 2021 – 200 metres away from his farm in Mazeyrat-d'Allier (Haute-Loire) – around 40 of his normally-200-strong herd had died, and milk production had decreased by 15-20% within days of the antenna being switched on.

He said: “There are no medical elements that could [otherwise] explain this brutal drop in milk production.”

Philippe Molhérat, the mayor of Mazeyrat-d'Allier, who had previously authorised the antenna’s installation, testified in favour of the farmer.

He said that he feared “a catastrophe on a human level” and that his “concerns” were growing for the 1,500 inhabitants of his village.

Yet, lawyers for the mobile operators affected by the ruling, which as well as Orange also included Free and Bouygues Telecom, said that there was “no scientific evidence” that there is a link between animal health and electromagnetic fields surrounding mobile phone antennas.

It comes as the rollout of 5G, which promises even faster internet speeds than 4G, has prompted controversy in France. Many antennas have been vandalised, and even been blamed (in a now-debunked theory) for the spread of Covid-19.

Yet, French health and safety agency l’Agence nationale de sécurité sanitaire (Anses) has repeatedly said that current scientific studies suggest that 5G antennas “do not present any notable risks to health because they use frequencies very close to previous generations of connectivity”.